Korigad - A walk in the clouds!!

﻿
﻿
This was the first time I was to be on a trek with unknown people, a new group called Trekshitiz (http://trekshitiz.com/). So I chose a relatively easier one and Anand was good enough to join me.  Trekshitiz is a trekkers group from Dombivali who are avid trekkers and organize treks for fellow travelers. They have also taken up a new project to conserve, clean and restore the Sudhagad fort. Great work guys!!

We were told to gather at 5:45 am at Dombivali. However, the bus finally left at around 6:30 am. Andy had a hard time and spent unnecessary money reaching from Borivali and finally took a rickshaw to Ghatkopar and then a train to Dombivali. He could have taken the normal route had he known the flexibility of timings. There were a total of 45 people on the bus to Lonavala and everybody had a merry time singing songs, pulling each others legs, tying friendship bands and gazing at the scenery outside.

As we neared Lonavala, a misty octopus started stretching his tentacles all over. The trees were engulfed as they swayed to breathe from its hold, the mountains were covered, the roads disappeared and you could practically see nothing beyond a few metres. The bus driver did a great job driving in such conditions. I had never seen so much of fog or mist before, it just refused to go!! We reached our destination, Peth Shahpur which was the base village for the trek and had breakfast of idli chatni and tea, and the introduction and instruction session was kicked off by our trek leader for the day, Swati. It was good to get acquainted with people from different walks of life. There were 2 kids in the group too!

The Korigad trek is a very simple one, the easiest trek I have experienced till now. The initial 15-20 minutes is through a forest and you get to see the peak of the fort on your right while you walk. Criss-crossing bamboo trees, falling on each other as if in love, little streams formed by the rain water, the sloshing mud and the runway clouds high up above capture your attention. In the middle of the forest, suddenly, out of nowhere appear steps which lead to the fort. Halfway across the steps, you come to an open space with a cave on the right side, a Hanumanji temple and beautiful landscape to your left. A little ahead is another small cave and then comes the Darwaza to the fort. There are around 5 ‘Tofs’ on the fort, the biggest one called Lakshmi Tof and 2 temples, one of them being of Goddess Koraidevi. As we started the parikrama of the fort along its edges, we could hardly see the valley below; in fact everything was covered by the clouds. A mere 4-5 seconds disappearance of the sheet of clouds exposed the beautiful surrounding of the Amby valley and the entire landscape. Am sure on a less cloudy day, the scenery would be worth gazing at for hours and hours. There are 2 good enough lakes and some people were having a gala time in them. In the blinding mist, the sound of the waves formed by the lake seem like you are near to an ocean and since on the other side, all you can see is white foam, it literally gives you a feeling that you are walking the length of a bridge on a wide ocean. We had fun at a waterfall from a cave like formation and Andy started shivering like a leaf after getting drenched in the waterfall. It was fun walking the entire circumference of the fort. The wind whipped us with all its might and wouldn’t stop and made it difficult to balance and take your next stride. The mighty force of the wind reminded me of the Paranthampura or Eagle Rock near Thekkady where a light weighted person can literally be carried off his legs by the powerful wind.
And then it was lunch time. Like nomads, we had our lunch near one of the temples and lakes, without shelter in the pouring rain and the blowing wind. It was fun and a different experience!
Post lunch we started our descent and were down in no time. The group wanted to take their next halt at Tiger hills in Lonavala. The mist just refused to lift and the place was crowded and buzzing with activity as weekenders had come in flocks to enjoy the rains and waterfalls.
We finally reached back to Dombivali station at around 9:30 pm. A day well spent!!

History of the Fort

This fort was incorporated into his kingdom by Chhatrapati Shivaji along with the forts of Lohagad, Visapur, Tung and Tikona in 1657. On March 11, 1818, Col. Prother tried to take over this fort but even after a prolonged siege could not make any headway. Finally on 14 March, by igniting the stored ammunition by means of a loose cannon ball he succeeded and this fort went to the British (Source : http://en.wikipedia.org/wiki/Korigad) 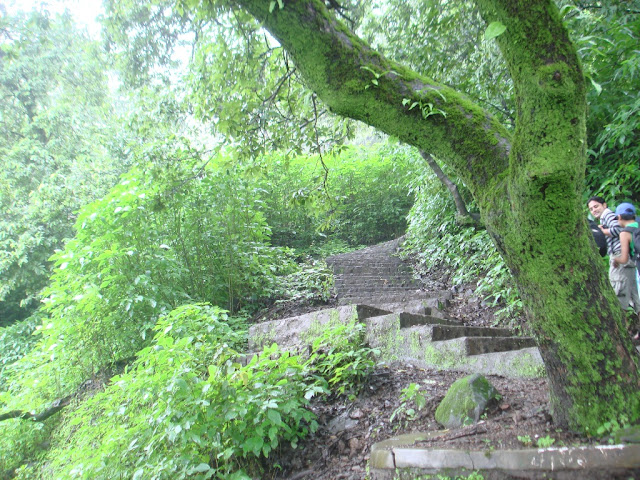 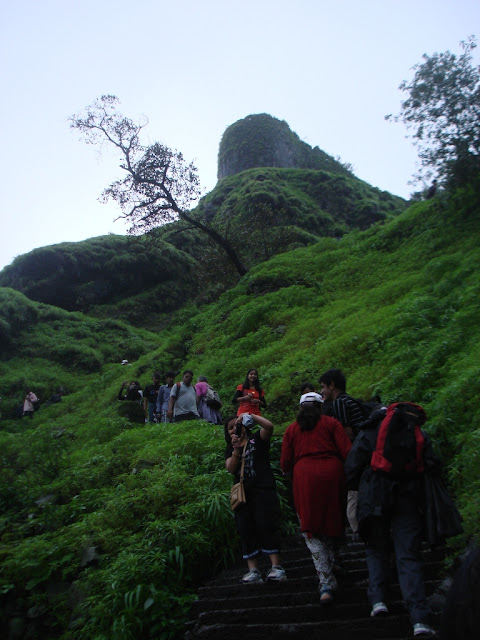 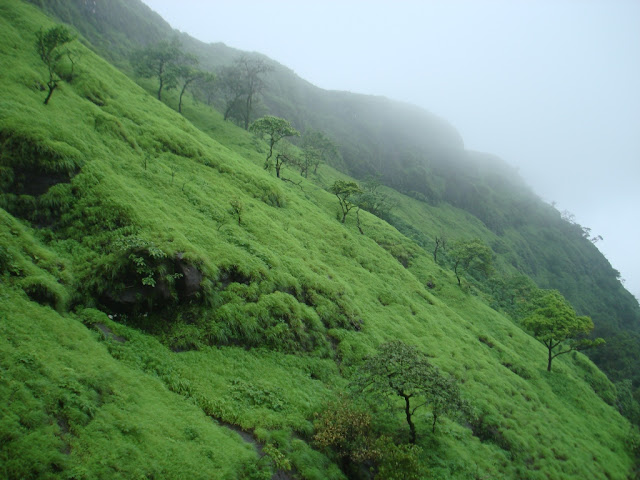 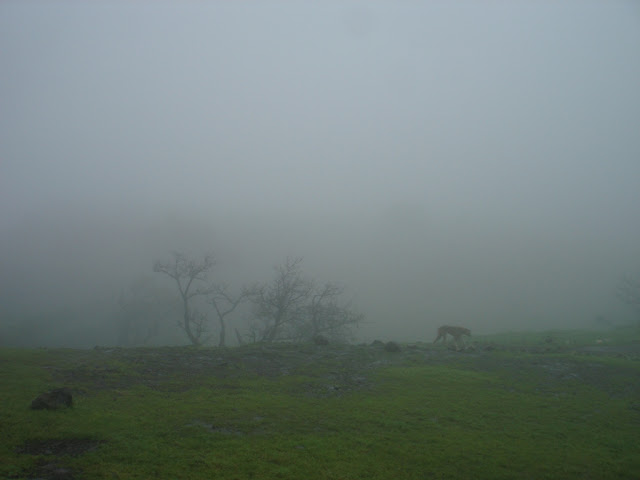 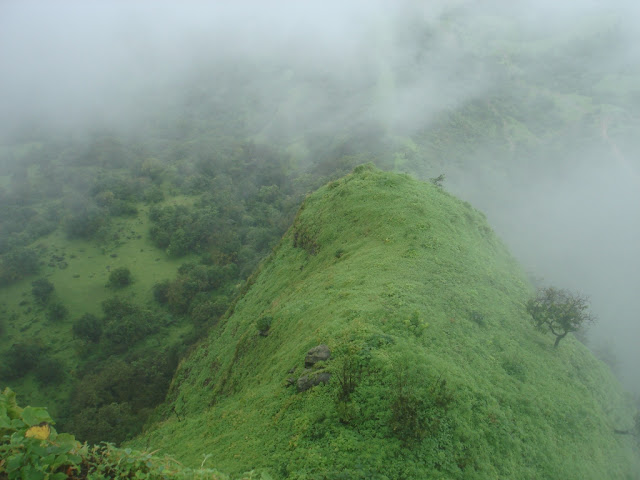 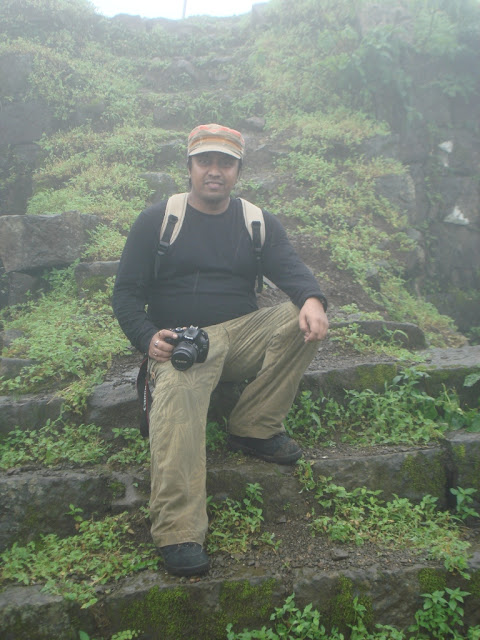 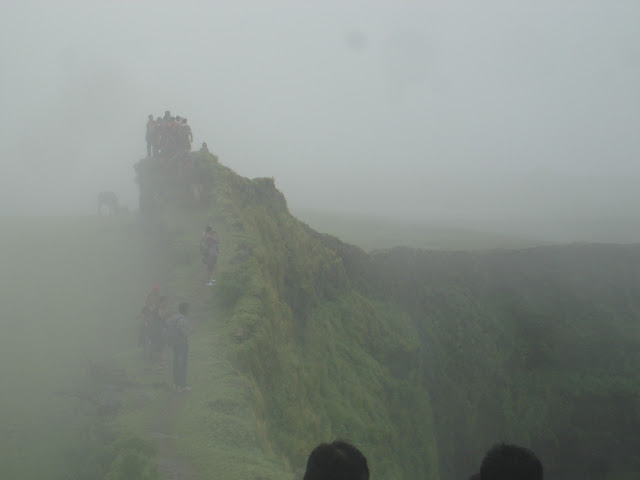 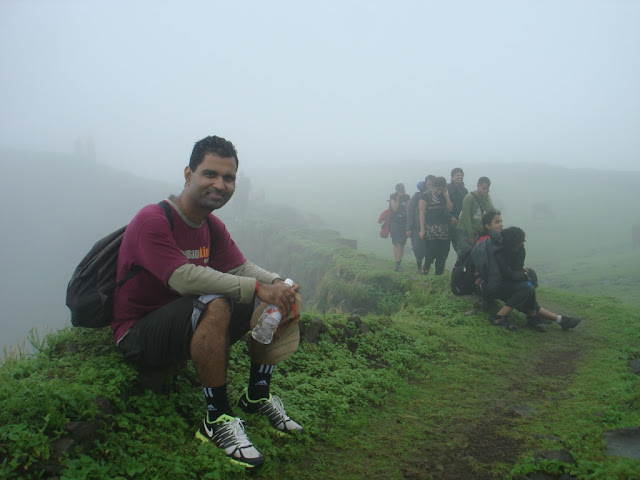 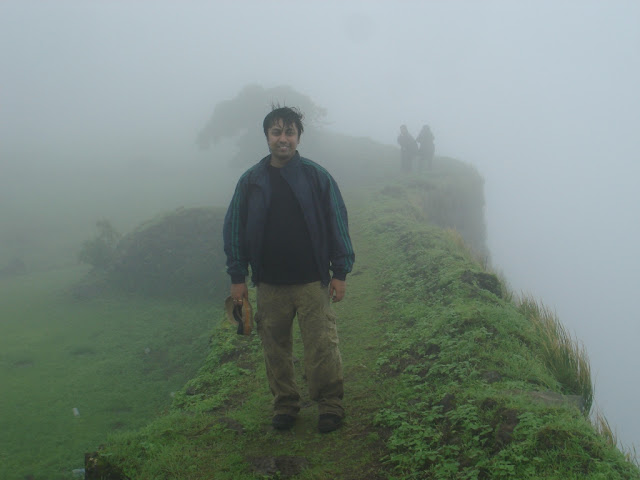 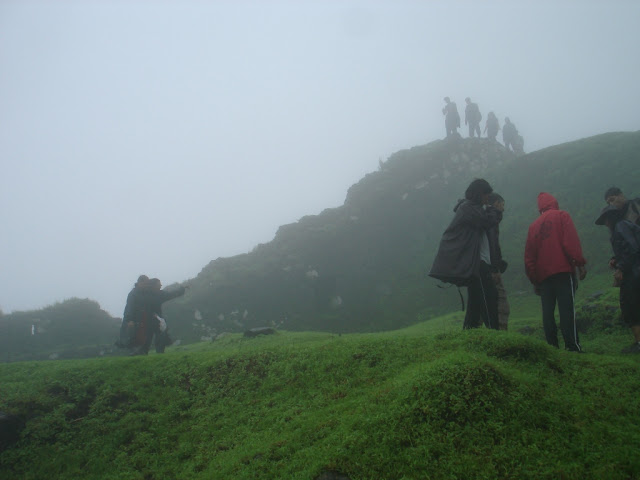 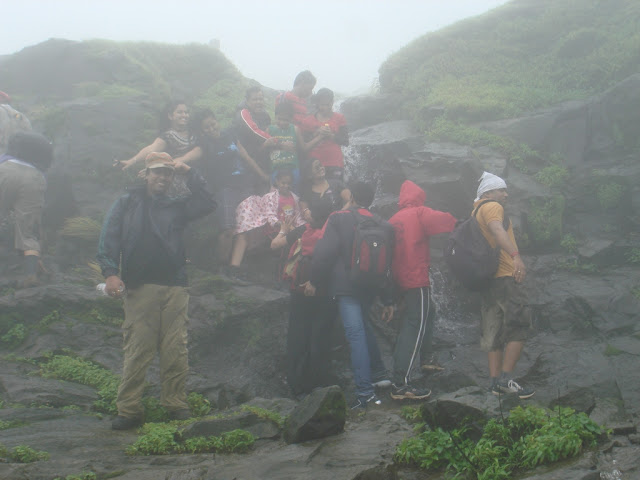 Posted by comfortably numb at 4:35 AM