I love the crowd, only if it’s the swaying blades of the green grass,
I enjoy the darkness, only if it’s amazed by the multitude of twinkling stars,
And I love the deafening sound of silence as I lie perched on the zenith,
resting my hands on my knees, my eyes in awe,
I simply love the mountains, for everything….

Sondai is a small fort, well, less of a fort and more a watch tower. It’s a part of the Karjat or Matheran range of mountains. A less known fort, the name of the fort is derived from the temple of Goddess Sondai at the top of the mountain. Sondewadi, the base village for the trek is a small hamlet of a few huts. Alighting at Karjat station, one needs to get out at the east end and catch a 6/7 seating rickshaw called a tumtum to reach Sondewadi which is around 11-12 kms from Karjat. On the way to Sondewadi, one can catch glimpses of the Morbe dam but rest assured that this is not the best view of the dam one can get on this trek. There are no shops at Sondewadi, so one is better off buying whatever they need from Karjat station.

This again was a trek with Tattva adventures and the count was 26 this time. So, we ‘Special Chabees’, celebrating Friendship Day, embarked on our trek and right ahead we could see the summit we were heading for. The rain God eluded us on this trek and it was extremely hot and humid as panting and puffing, we climbed the mountain. The trek is through a less dense forest and one can reach the top of the fort in about an hour or so. Though a relatively easy trek, it has got quite a few rock patches and one needs to be careful at these. Some of these rock patches have carved steps but in the rains it could pose to be a little tricky. After about 40 minutes of trekking, one reaches a plateau and as one turns back; the Morbe dam lies there, spread with open arms, calm and placid like a map from an atlas. Right ahead, in the distance one can see the peak of Irshalgad and to the right, the peaks of Matheran mesmerize the onlooker. These peaks of Matheran like Garbett point, One Tree Hill etc. are other trekking destinations.

To the left of the Morbe dam, lies the smaller Vavarle dam. From the plateau, one can see the iron ladder which takes us to the top of the mountain. There are two water cisterns to the left, carved in the rocks, but from the look at the water, it didn’t look like potable water. Another 10 minutes of climb from these cisterns and one comes across a rock patch which is at the edge of the mountain. It’s a free climb of about 15 feet and firm grips of both hands and feet are needed. Needless to say one needs to be extra careful while crossing this patch. Once the rock patch is crossed, the iron ladder takes us almost to the peak of the fort.

The top of the fort is a very small plateau with the idol of Goddess Sondai sitting peacefully under a tree. It is advisable to remove your footwear here. There are no structural remnants of the fort. Our local guide informed us that during Diwali, the temple attracts people from the nearby villages to give their offerings to the Goddess. He also told us that when the dams weren’t there, the villagers climbed all the way up the mountain to get their reserve of water from the cisterns. A ‘bhagwa’ orange flag with Chattrapati Shivaji Maharaj’s face flutters high in the sky. There is nothing much to do on the top. ‘Nothing much to do’ however is an understatement when you have such breathtaking views on the palette around you. One of my trek mates drew my attention to an amazing feat of nature. On the layered green mountain that lay ahead, a patch of grass was swaying in a wavy dance, and the small bushes, as if another part of the troupe, were dancing in a hypnotic trance; a perfect symphony to the orchestrating wind that our eyes relished and embraced.

We lay on the grass, resting, lazing after having our packed lunches, appreciating the magnificence of nature. And then it was time to descend and go back home but before heading home we spent some time in the flowing water of the Morbe dam, a little away from Sondewadi. It was a very enjoyable and thrilling trek; marred only by the absence of the rains. But then, one can’t always be lucky, can they? 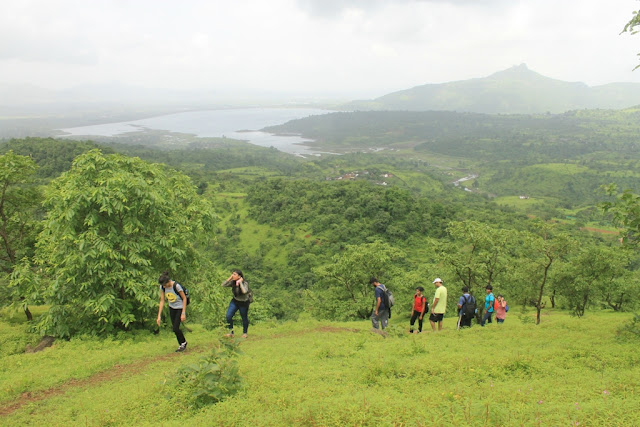 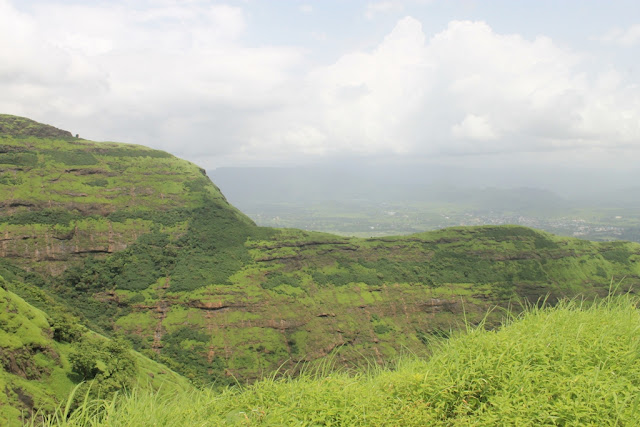 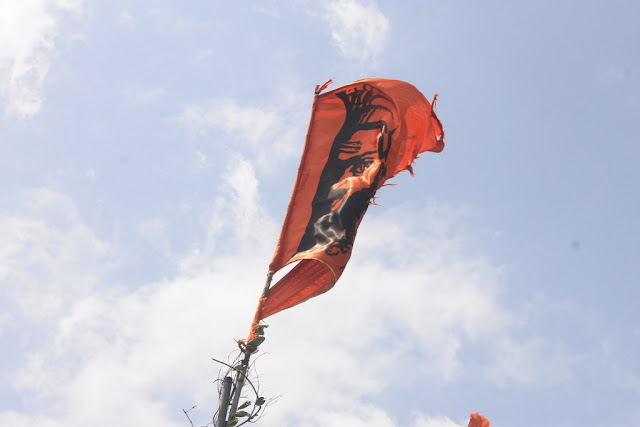 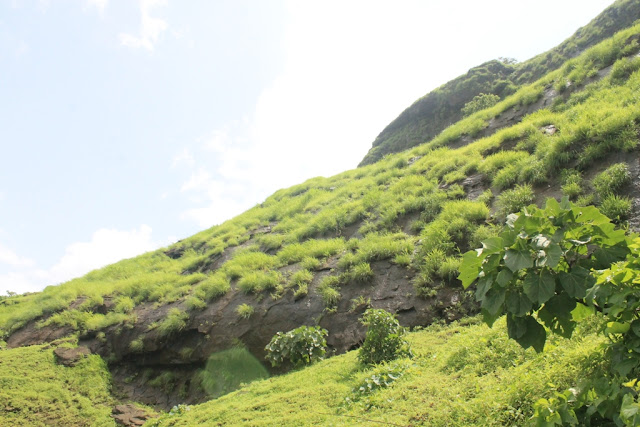 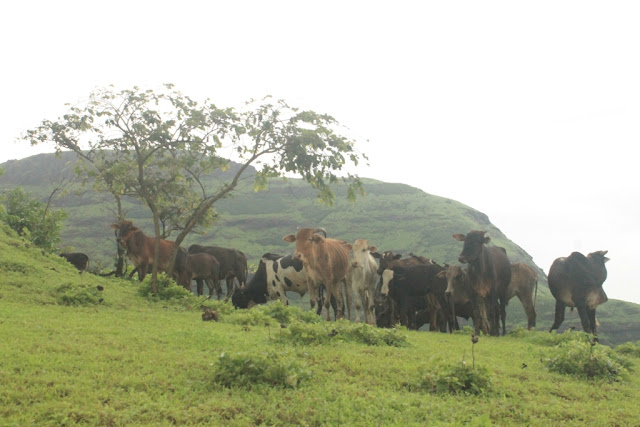 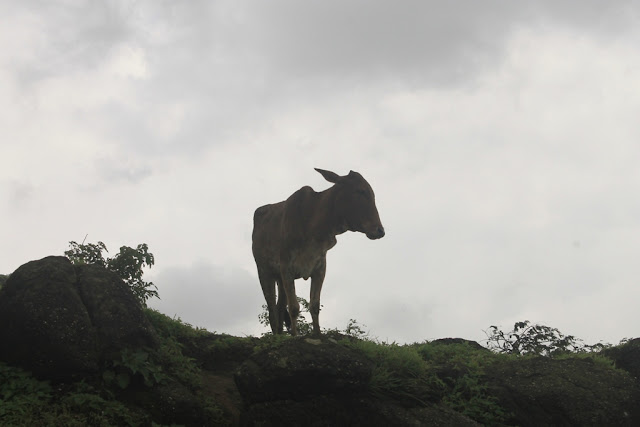 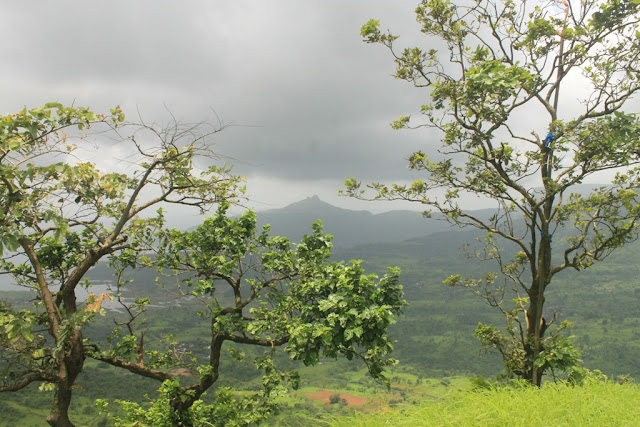 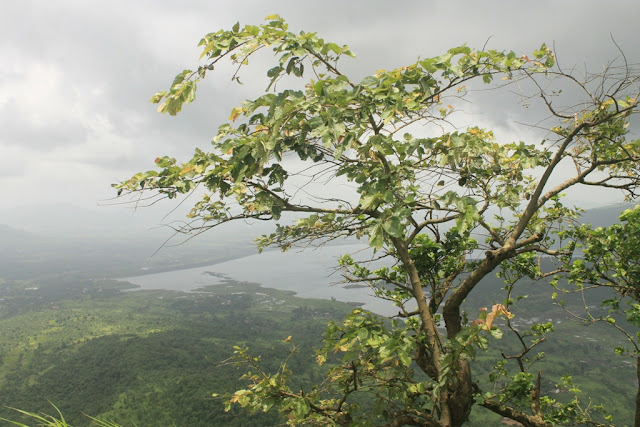 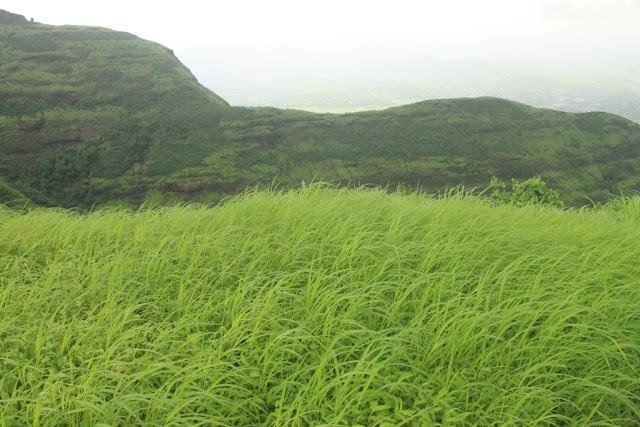 Posted by comfortably numb at 12:14 PM