The Birds of Coorg - Life at Honey Valley

31st Jan 2013
﻿﻿ ﻿          As written in my previous blog on Storm Festival, I didn't get to see a lot of Coorg. All that I experienced of Coorg was at the Honey Valley resort (http://honeyvalleyindia.in/) with its widely spread coffee plantations and acres and acres of wilderness. There are quite a few easy and medium grade trekking paths around the estate. A took a few of them through a dense jungle. It felt a little eerie cause I was all alone but enjoyed every bit of it This place is a birders paradise and I was lucky enough to be here and to get up to the cacophony of the winged colourful beauties. Birding to me has become like a passionate sport - it somehow takes me one step closer to nature. Here are some snaps I clicked. Hope you like them! 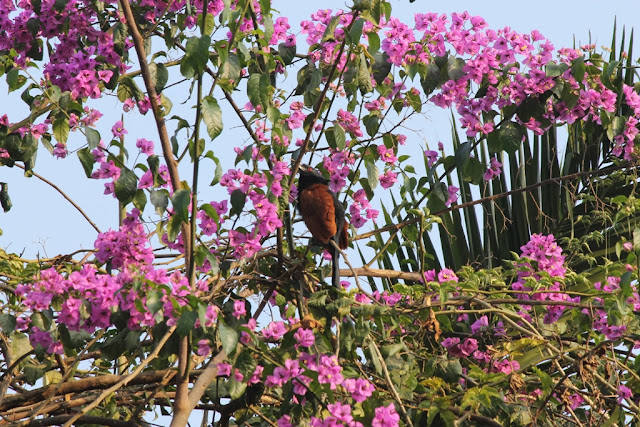 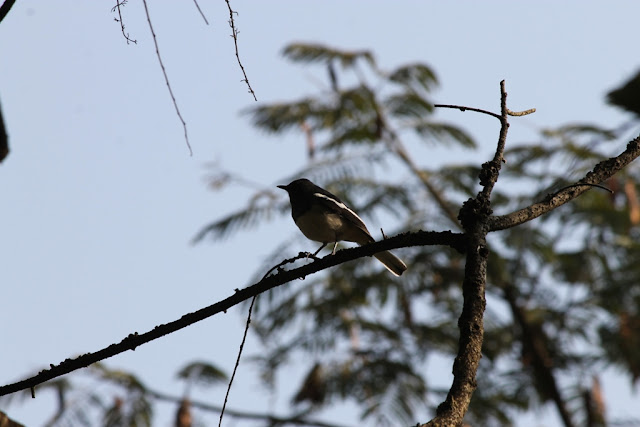 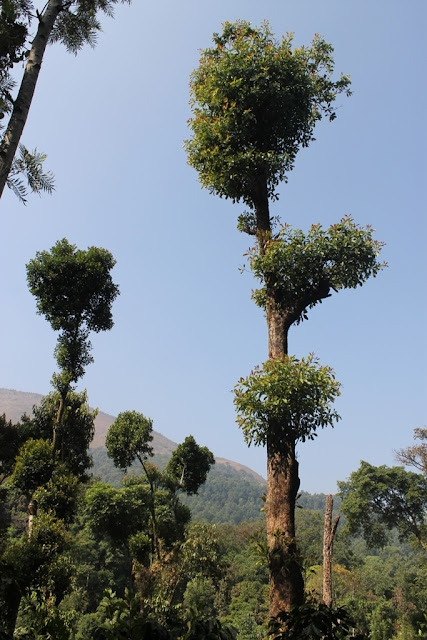 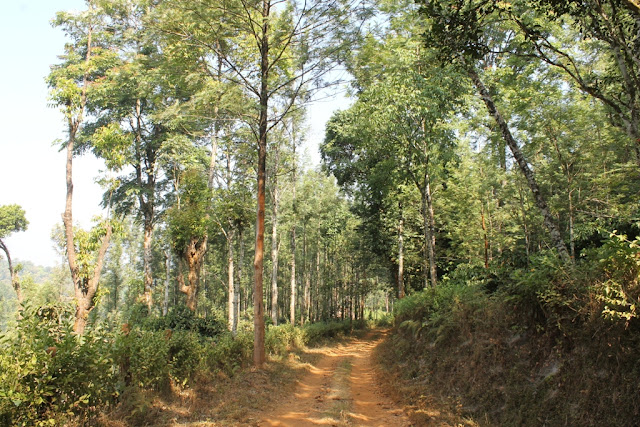 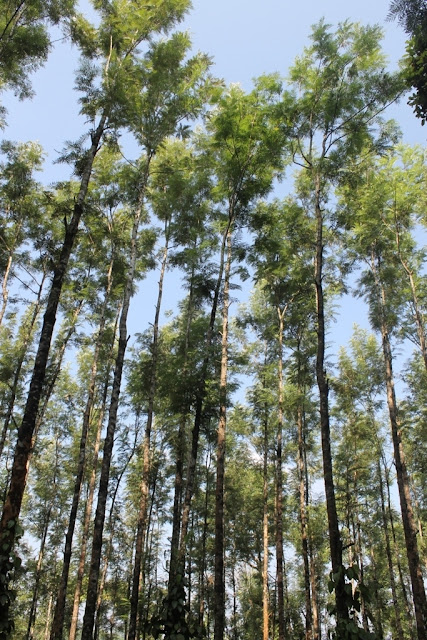 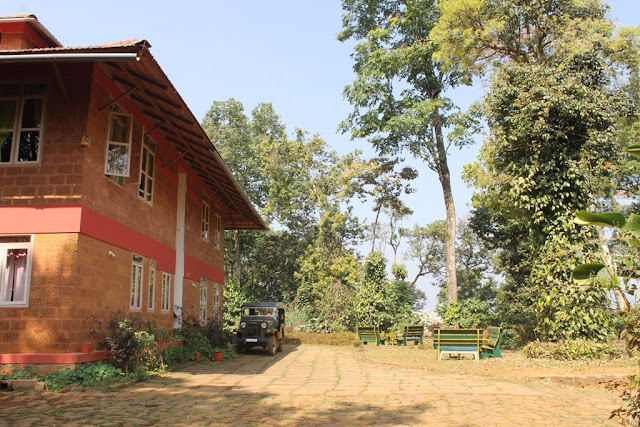 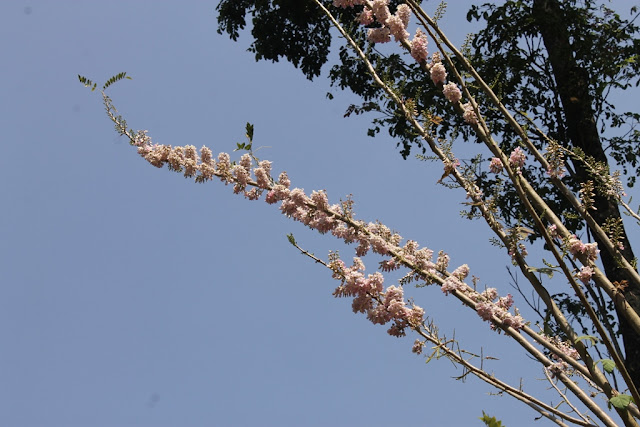 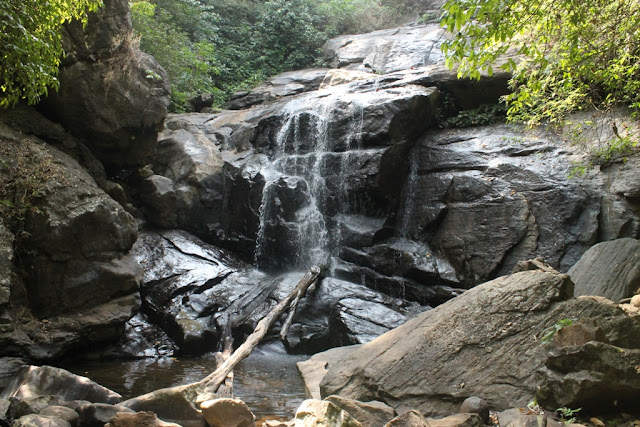 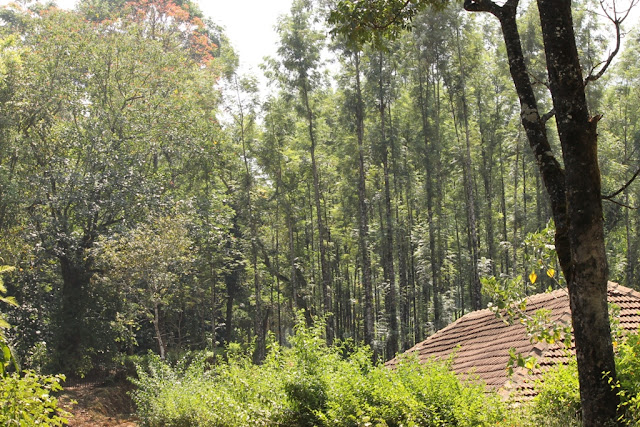 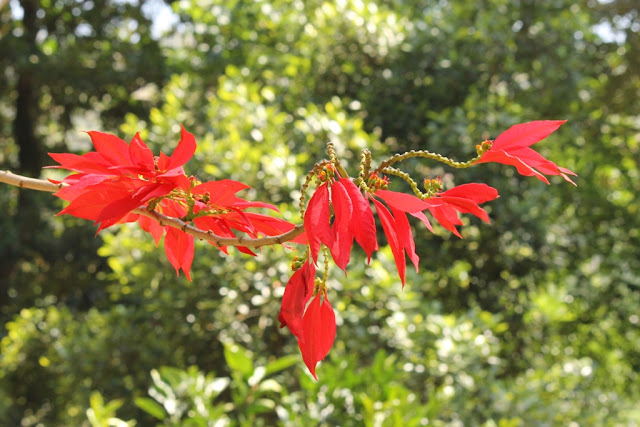 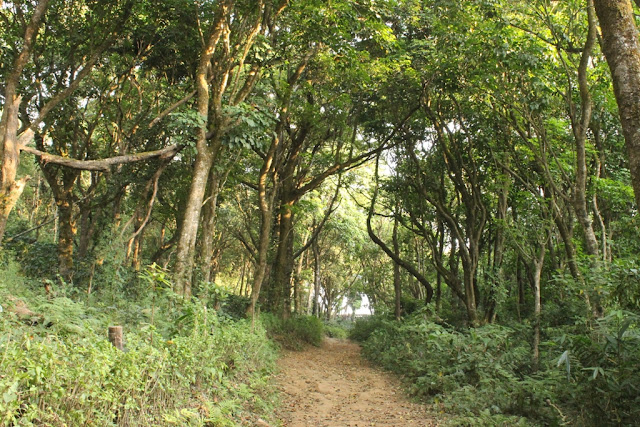 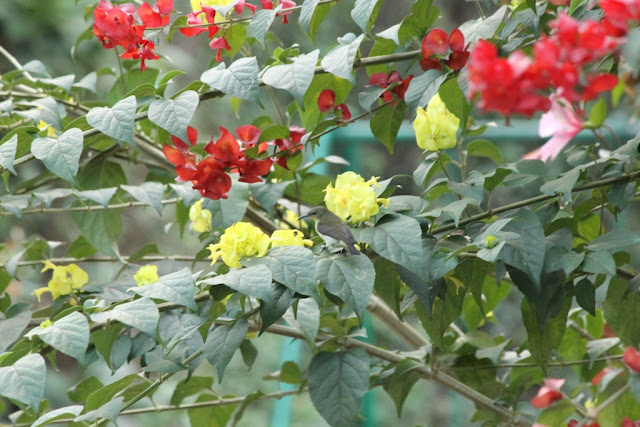 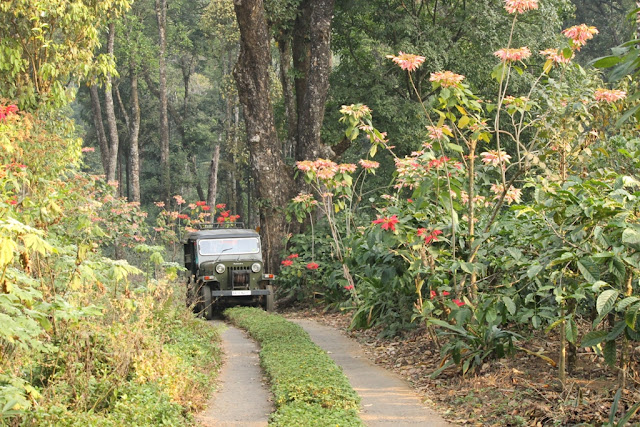 Posted by comfortably numb at 1:06 AM No comments:

Riding into the Storm - The Storm Festival 2013

With the plethora of festivals throughout the year, why would anybody need another festival?
“A music festival” did you say? Now, what’s that?
Though a relatively normalized culture abroad, defined and glorified by , music festivals are sort of a new concept to , or are they?

Wasn’t it a music festival where Tansen challenged all and sundry to prove him not to be the greatest musician of the whole of Bharatvarsh. He sang the raag ‘’Todi' to bring the shiest of animals, a herd of deer from the deep forests and garlanded one of them with a garland of flowers. The deer returned when Tansen stopped singing. Its then that Baiju Bawra, the master of masters sang the raag ‘Mirg RanjaniTodi’ to bring back that one garlanded deer. Sheer magic, I say! Though more of a contest, it was festival which celebrated life and one of its greatest offering – MUSIC!

Indian singers are said to light up lamps with their alaaps, to bring in the rains and to melt stones with their raagas. But somewhere, like all good things, this art is getting lost in the mundane monotony of the race of life – maybe that’s the reason we have to depend now on the Tatas and Reliances to bring us power and the almost always erroneous Meteorological department to predict the rains!

This was the second year of the Storm Festival organized by LiquidSpace Entertainment. Highly recommended by a colleague of mine, I was destined not to miss it this time. The festival is held in a huge open space in the small in the Kodagu (Coorg) district of Karnataka. To get there, a private vehicle or the local bus is your only means of transport. Napoklu is about 20 kms from Madikeri which is the main town of . Madikeri is a central hub, from where you can avail buses to the major cities of , Mangalore (130 kms) or and also to the major tourist sites in Coorg. To get to Napoklu though is a task as you end up spending more than half of your day in journey – but who’s complaining? Napoklu; in fact, all of Coorg has innumerous home-stays, hence accommodation is not a problem.

As I stood at the entrance gates minus my wife who was going to join me but couldn’t (The Lord works in mysterious ways! J), I was jolted by the kind of security check they were putting us through. Every damn clothing in your bag including your underwear and baniyans were individually removed, opened and jhatkofied like they were to be hung on the clothes line. Camera batteries were being removed, even the mighty pen was not spared – they were being opened up to check the riffles and nibs. Once that was done, another big, burly and bear like man would press every muscle in your body and feel your nerves – I thought he was trying to get into our souls, well he almost did!! And finally you were asked to remove your socks and even your shoes were checked. It felt like some Maharani had lost some Kohinoor while she was making love to one of the ministers and we were bearing the brunt of it. Come to think of it, if the gatekeepers were homosexuals, they would enjoy each minute of their job and would perform with the greatest integrity. Well, all this was due to the NO DRUGS policy of Storm - really appreciated!

As I was being harassed by the soul searchers, I could hear the music from somewhere inside and I thought that the show had already begun and I cursed the security guys even more. Once inside, I first headed for my allotted tent to dump my things and rush near the stage. The Storm Festival is a camping festival and tents are pitched up in rows. There are tents for the performing artists as well which are separated by a barrier from the others. As I reached the stage, I understood that sound check was in progress for the lined up bands and the curtains were to be rolled up only at 1 pm. For 2 days, you cannot leave the premises. The food was good at the stalls and answering natures call was a challenge.

There were 3 stages named in Coorgy nomenclature as the ‘Coffee’ stage, ‘Paddy’ stage’ and the ‘Spices’ stage. The crowd was catching up after surviving the security checks as the first band readied themselves for the performance. The first day had bands like Agnya, Coshish, Agam, Advaita, The Raghu Dixit Project, Karsh Kale Collectiv and the single performers like Alisha Pais, Sidd Couto etc. Over the 2 days, the crowd was pretty thin than I had expected and the crowd was more of couples and groups from nearby or Mangalore. When I told someone I had traveled all the way from Mumbai, they thought I was crazy. The show opened with Agnya, a band from Mumbai. It felt really Indian to see Indian musical instruments like the Veena being played. Agnya was more classical and instrumental and they did a wonderful job. The best thing I liked about the festival was that every band played their original numbers and there were no cover versions. This was an ideal platform for upcoming musicians to showcase their talent and get recognition and fan following. This is actually a big step for the Indian rock and pop circuit. And this was not just about rock and pop, in fact I saw a totally new genre of Indian music. Most of the bands were classically trained and didn’t shy from singing folk songs in their own versions – and what a pleasure to the ears it was!! While Papon rocked an Assamese boat song and enthralled the crowd, Swarathma and Raghu Dixit sung in the South Indian language and Agam enchanted the crowd with Carnatic rock! The best part of being in a festival like this is that all the biggies like the Sushmit Sen, Rahul Ram from , Papon and all roam around you and enjoy the festival atmosphere casually as much as you do, without those superstar airs. I even got the chance to chat with some of them and get myself clicked with them. I wish all the best to all the musicians, the ones who aren’t that popular yet, since I did see some real talent, some great music and real crowd entertainers amongst the lot.

The write up will get too long if I mention all the musicians so I will write about the ones I liked the best. The Coffee stage was where all the bands performed, the Spices stage was where the DJs spun their discs and mixers to glory and the Paddy stage hosted solo performances. I never knew Papon was such an entertainer. I used to think he was a quiet kind of a guy who is more into serious music, but once he and his mates were on stage, they were a real crowd puller. He sang a couple of folk songs with an electric touch and the crowd went berserk. The band I liked most was Agam, Carnatic rockers they were and the band is real tight. Loved the guitarist and the drummer too! Before they were on stage, I was standing beside them all the time and didn’t know about them then. This was a special time for the talented vocalist as his family and infant had come along to watch them perform. I definitely am going to buy their CD. Most of their music was Godly, well in the literal sense since their songs were titled Brahma, Swans of Saraswati, Rudra etc. Their guitarist was a true rockstar. Swarathma, The Raghu Dixit Project entertained the crowds as usual. Advaita was another band people were well aware of with their blend of classical and rock music. One of the guys plays the Sarod!! Karsh Kale had tagged along a lot of musicians like Shilpa Rao, Monali Thakur and Anoushka along with Benny Dayal who danced his entire act in typical rapper style. The bands Coshish, Lagori and Astitva were okay. Devika Chawla was a real drag and the crowd just vanished when she was on. Needless to say, the grand finale was the most rocking performance with none other than starting with ‘Bandeh’ from Black Friday. They also sung ‘Maa Rewa’ and ‘Kandisa’ but the real fun begn when Shankar Mahadevan joined them and displayed what greatness and talent really was with his mesmerizing vocal skills and jugalbandis between him and . Sushmit Sen (am a great fan of his), the lead guitarist of magnetized everybody with his guitar skills. We fans were left wanting for more!

The solo stage had Alisha Pais, Sidd Coutto, Vedant Bharadwaj singing songs of Kabir, Siddharth Basrur amongst others. DJs like Teri, Nikhil Chinnapa, Storm and Michael Woods rocked the Spices stage but my interest is limited in this part.

As the night turned cold while we returned to our tents, there was more music at the camping site with some of the band members and others playing unplugged versions around a bonfire. It was freezing cold at night and when you unzipped the tent, water trickled from the accumulated dew drops.

This was my festival experience and am sure gonna return next time! Bye for now.

Though I had planned to roam around Coorg before attending the Storm festival, didn’t happen so. I spent a day at resort, around 20 kms from Napoklu at a place called Kabinakkad. I had a great time amongst nature and more importantly the birds. I made some interesting friends from other countries. is a perfect spot to be surrounded by nature and for a birder like me, it’s a paradise. I saw some exquisite hill birds. This place is also a perfect spot for treks – both small and long ones. The hosts were great and the Lady of the House’s interest in the plantation and the beautiful garden all around is really amazing. Though access to this place is a little difficult, having your own vehicle helps and you will not regret one bit of landing up here and would be left wanting for more. Lezz and aunty, if you are reading this, it was really very nice talking to you and thanks Jyoti for all the directions. Had a great time and will visit again, this time with family!! 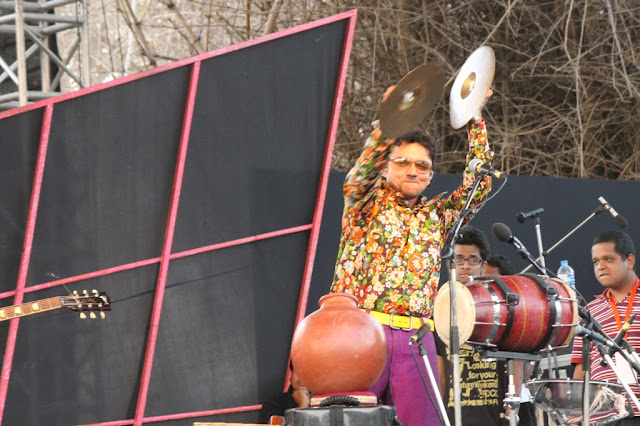 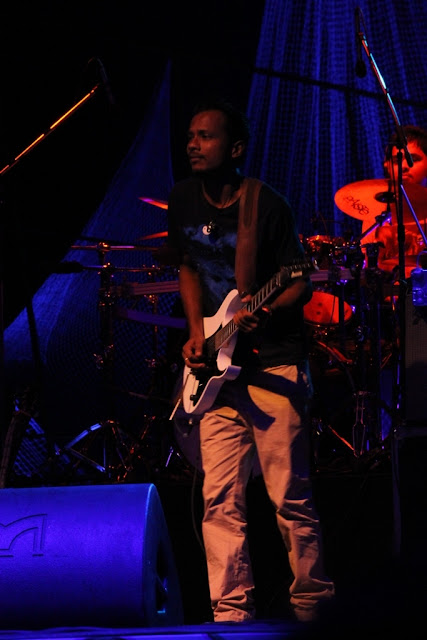 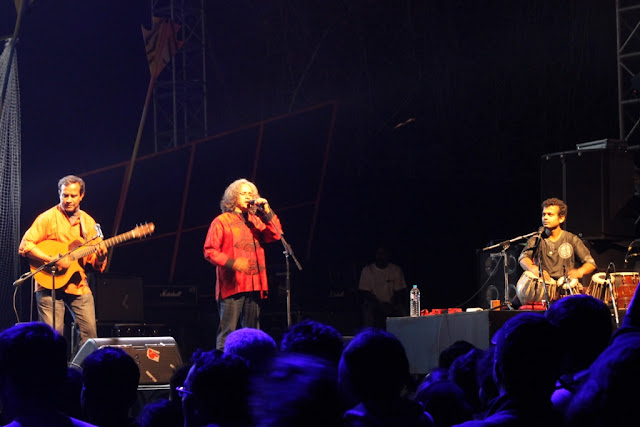 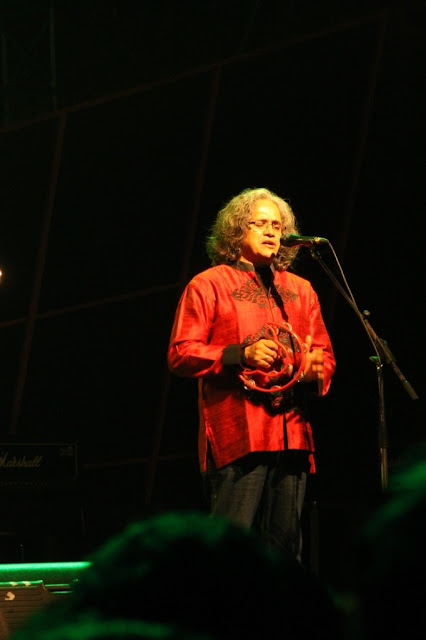 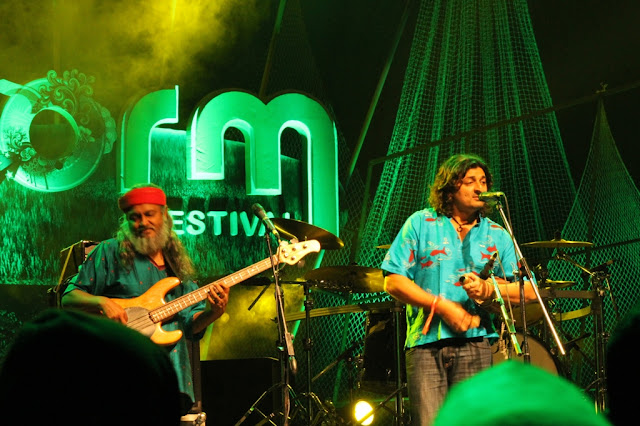 Posted by comfortably numb at 6:17 AM No comments: