This trip just came out of the blue and surprisingly fell in place. Leave granted, tickets booked, research done, itinerary fixed, work buried, bags packed, as I waited for the rest of the gang on Thane station, the green lap of Mother Nature a few 100 kms away readied itself to engulf us in its arms and leave us mesmerized.


Konkan Railways acts as a beautiful invitation card inviting you to the celebration of Maharashtra's coast line. Konkan Railways also boasts of the longest tunnels in . In fact, the top 5 longest tunnels span the Konkan rail-line, the longest being the Karbude tunnel between stations Ukshi and  Bhoke running upto 6.5 kms. A couple of hours later, the scenery started opening up to green, green and more green; lush paddy fields with the recently planted rice, thatched huts, bullocks tethered to the ploughs, marching as a couple, round and round, loosening the mud, the rain sliding diagonally over invisible roofs, the farmers stomping the slush directing the bullocks, hidden in tent shaped tarpaulin jackets, praying for the rains, yet hiding from it.

﻿
﻿
As the train advanced, we swayed inside with it’s rhythm and obliged all the vendors by hogging on everything that they brought – cutlets, samosas, bhel, boiled groundnuts, cold drinks, biryani, cucumbers, chai
Chai garma garam chai
Samosa bolo samosa
Kakdi ghya bhau kakdi ghya
The old uncle sitting beside us must be wondering that we had come from some famine stricken region. As the scenery took rest each time the train entered a tunnel; engulfed in darkness, people hooted and whistled to their hearts content. It’s fun to be kids’ again! Outside, the mountains grew in size and covered themselves in dense green forests, and to give it a picture perfect effect, waterfalls rushed down their skin tickling them everywhere. Now and them, a river or a stream made a special appearance.
Between pulling Jayu’s leg and playing Mendicot (a card game), made an intelligent comment on the station names that appeared. Adavli (in Marathi it means restricted/stopped), Vilawde (you know the hidden pun, don’t you?), Khed – Rukawat ke liye khed hai?? – Funny names, in fact we saw a village named Kachre – ha!!
We reached Rajapur at around 4:30 pm, a little late than anticipated and our first trek was carrying ourselves up the steps of Rajapur station. As we sat in the rickshaw which was to take us to Balus’ village through narrow winding roads, our jaws just dropped in awe at the shades of green all over, light green, dark green, leaf green, grass green, tree green, moss green, this green, that green, all green, everywhere green. The freshly planted rice called ‘laavni’ stood slanted like numerous little children in a P.T. drill.

﻿﻿
The Village life
We were received with a warm welcome from Balus’ parents. Tea was ready by the time we freshened up and was gulped down along with tasty ‘butter toasts’ and ‘zeera butters’. There was a mommy cat and its two kittens which were all over us and while Sandy and me felt uncomfortable each time they came near, Jayu couldn’t help picking them up and cajoling them. At night, when we slept, they made every attempt to sleep with us in our blankets and prancing all over our bodies.
Most of the houses in Konkan are built by the ‘Jambha dagad’ or ‘Cheera dagad’ as the call them. It is a reddish brown heavy and tough stone which is cut with machinery to make big bricks. The roofs are typically made of the ‘Kaul’ which are reddish tiles. Every house would be spread over a huge area which if given to people in Mumbai, they would start dancing in madness. Most of the houses have their fields surrounding them. Some of them have it elsewhere.
A ‘’ – place where cattle are kept after their hard days work is present within the boundaries of each house. Another common thing I saw in most houses is a room for storing wood, somewhere it was present within the house, elsewhere it was just outside. These woods/logs are cut and preserved for the monsoon. This forms the primary fuel, rather the only fuel for cooking, heating etc. The toilet is mostly located outside the house. The best part is every house has a huge verandah called ‘aangan’ which is long enough to have a box cricket tournament. A Tulsi plant sits pretty at the entry of most houses and it is worshipped to keep evil away from the house and its residents. Like Balus’ house, there were other houses nearby with similar structures. A cluster of 10-20 houses make a wadi and 3 such wadis together form a village. Source of water is the nearby dam and stored in a common tank for the entire wadi and this also forms the secondary water supply for irrigation. Vegetable and fruit trees are grown around the houses and range from Jackfruit, Coconut, Pumpkins, Alu, Pineapples, coriander, kokam, laal math, darchini etc. – just pluck and cook. Every village has a temple in its vicinity. Here, a Datta Mandir overlooked the entire wadi. Could see solar street lights at most places. Village life is very simple. People along with their bullocks go to their farms in the morning for ploughing, planting, harvesting to return only in the evening. They are accompanied by the female members of the family as well. Characterized dressing would be simple cotton trousers or dhotis with a sickle tied to their backs, a turban, a tent shaped  ‘irla’  to save them from the rain, a ‘ghongdi’ to sleep in the farms or under the trees. Their meals are pretty simple and delicious consisting of various types of bhakris made of rice, jowar, nachni etc. A dish called ‘pithla’ made of besan (gram flour) is very famous amongst the villagers and they eat it with much relish. Gaavti chicken and kombdivade is another popular non-veg delicacy. We feasted on all this at his house. People don’t venture out after 7/8 pm. The villagers lead a very quite, simple and content life – maybe because they do not have many wants in life like their urban counterparts. They know the value of nature, the water, the soil, and the trees and worship them in all forms. They worship them and fear them. There is a strong likelihood that you would see snakes around some of the houses. Balus father told me how the rice will grow to its full height by October and then there would be harvest time and the crop would be cut and smashed to separate the husk from the rice. He said the neighbors are very helpful and attend to each other. Ganpati festival is the time when all the villages come alive with the arrival of the Elephant God.
﻿ 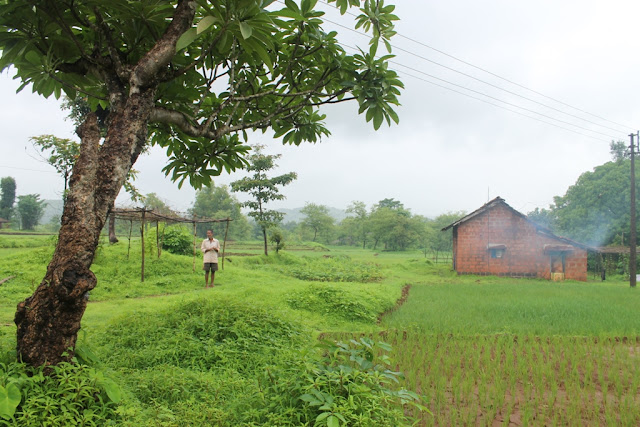 We were restless to roam the countryside the moment we entered the village. So we lost no time and the tea refreshing us we ventured out to take a detour of the surroundings. Balu and Sada took us through the jungle paths to a stream and a dam. Though not advisable since it would soon get dark, we enjoyed the walk and came back through another route which led us through the paddy fields. All the farmers had headed back home so the fields were deserted except for the freshly planted crops. Walking through the jungle, we had to be careful of the thorn trees as they were in abundance.
Over dinner, we discussed our next days plans for which we had to catch the 7:15 am bus from just outside the house which was to take us to the village ‘Unhale’ where Rajapurs Ganga made an appearance. In the village, you need to strictly adhere to the bus timings as 1 bus missed and you could be stranded for hours or it might be the only bus and you might need to postpone your trip. Once you reach Unhale, there is a hot water kund to your right and the way to the Rajapurchi Ganga is to your left. We enjoyed a lot in the hot water kund and took our time bathing and having fun as the water was nice and warm and it is said that it has sulphur which has healing powers. I guess most of the village folk come here to take a bath since I saw some folks munching on their tooth brushes, with towels and change of clothes waiting for their turn. There is no kund as such over here. There is a pipe from which water flows and the outlet is separate for Gents and Ladies.
Drenched, we then started towards the Rajapurchi Ganga. This is a walk uphill for about an hour. The walk is beautiful and through relative jungles but one need to take care in the monsoon as the path turns out to be really slippery. There is a huge unused Deep-Stambh outside the temple. The main temple is yet to be built to completion and there are other smaller temples of Lord Shiva and Veer Hanuman in the complex but the highlights of the place are the 12-13 kunds. It is said that the river appears in these kunds once every three years. It is no less than a magical phenomenon as at other times the kunds are as dry as the desert sand. Also the Bhatji told us that water in all the kunds come separately i.e. water doesn’t flow from one kund to the other; every kund has a separate source. The first kund is the smaller one just below the small Hanuman temple. Apart from the kunds in the open space, there is another Gaumukh (water coming from the mouth of a cow) and another relatively bigger pool in the main temple with a Picture of the Goddess Ganga in it. No one is allowed to touch the water in this kund and the priest while chanting mantras pours pots of water over you if you insist. People who are aware of this phenomenon flock from the cities too to take this refreshing experience and try and wash themselves of their sins and pay homage to the deity.
Coming down, we missed our bus and had to walk all the way to Rajapur city. It was a long walk as we were clueless about the way and after few directions took a way through houses and finally reached the bus stand from where we were to go to our next destination – the temple of Dhoot Papeshwar, but not before having our home made and very tasty lunch at ‘Navre Bandhu’ – Chapaatis four times the usual size, watanachi bhaji, tasty achaar and daal and rice. The host was very enthusiastic and guided us and told us various other itineraries but we were content with ours. The is another tedious trek for about an hour and it knocked the wind out of us after the meal. The temple is beautiful and has a great waterfall behind the temple apart from which is accessible and enjoyable. There is also Ganeshji’s temple and a Dutta Mandir across the waterfall.
We met a guy from Karjat over there who had grown his finger nails to more than a foot and a half and told us various stories. The walk back was much easier and we took the bus back to the village where we were stationed.
When we were roaming around in the evening, a village aunty was surprised that we had gone to Rajapurchi Ganga. She told us that they (don't know who they were) were looking out for sacrificing a couple of people to the Goddess.Scary!! Later Sada and others rubbished this claim and said that villagers usually spread such rumours. 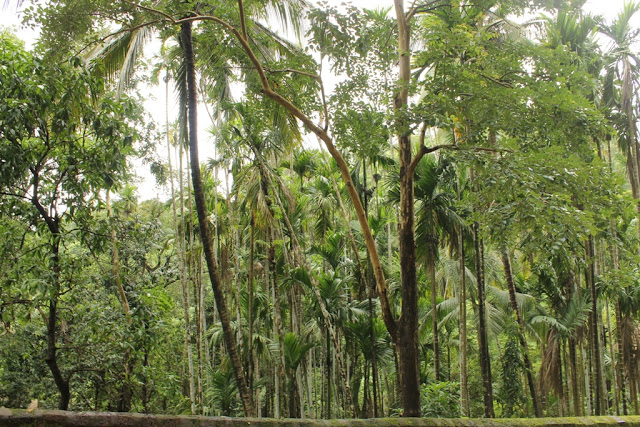 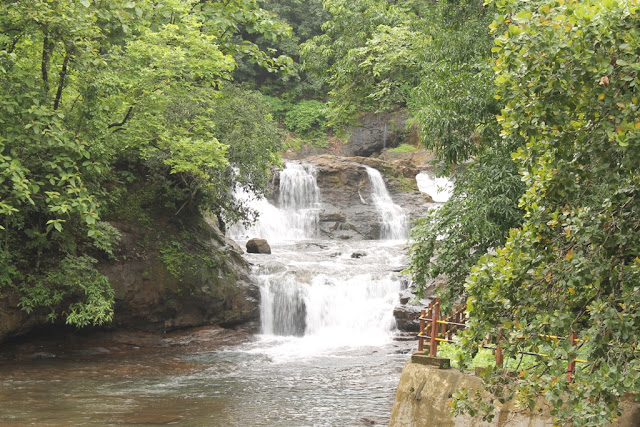 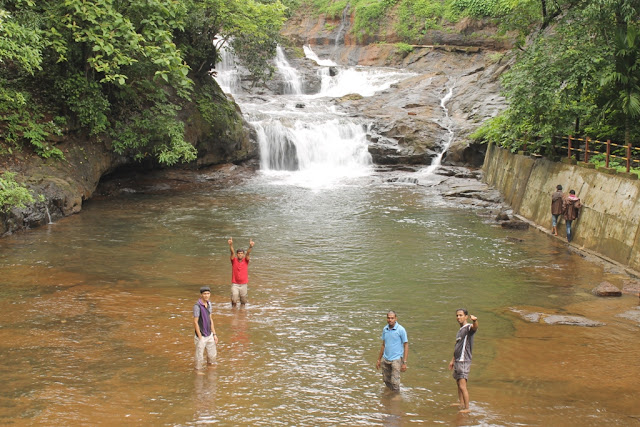 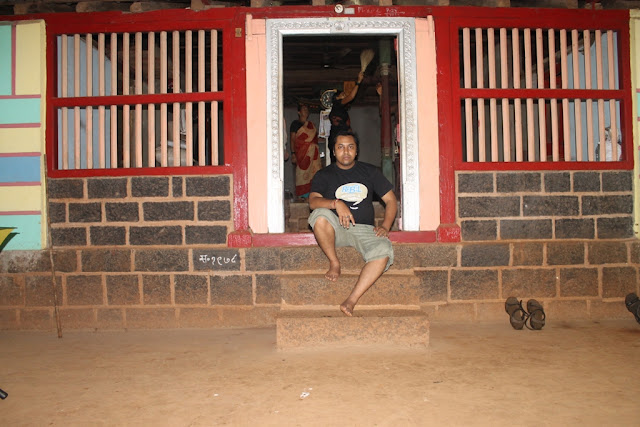 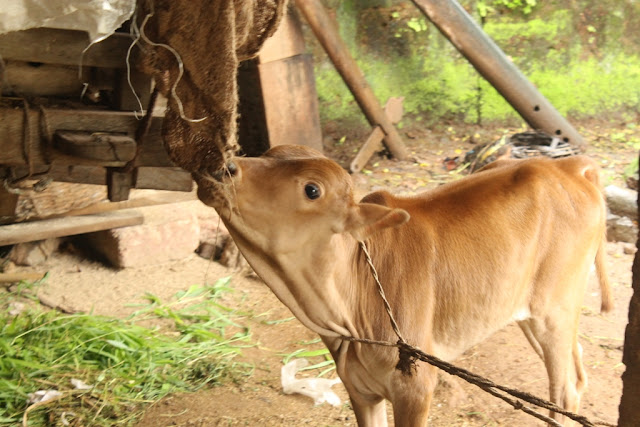 Posted by comfortably numb at 10:58 AM