Gorai beach - A day picnic on the beach

So...this was my first relatively longer outing in my car. And guess what? my darling received its second scratch....due to some jerk trying to reach home or wherever on a very very URGENT basis.
Everyone wants to get everywhere first.....ya right, better speed up cause the world's coming to an end in 2012, isn't it??
My heart bled!!

We reached Gorai after about 1 1/2 hrs at 2:30 pm., driving through Ghodbunder road, Mira Bhayandar and then taking the Uttan road. You get a glimpse of salt pans as you drive through the Uttan road. Gorai is about 40 km from Thane. Gorai is also accessible by ferry from Mumbai.

The weather was pleasant when we reached, the water was luring and the beach looked like a regular for a lotta people. Gorai beach has brownish wet sand. The entrance to the beach is a very narrow path and don't be surprised if your car is stuck midway - there is hardly space for 2 cars to pass at the same time. It was picnic time for lots of families visiting the beach. Most of them , like us had come up with packed lunches and had spread their mats and 'chaddars' and gossiped, ate and watched the belongings while some of their folks enjoyed the waves.
The couples captured the rocks and were happy watching the mortal picknickers while they, arm in arm swore of their immortal love.

Though Gorai doesn't have any of your water scooters, speed boats or other water sports; it does have your traditional 'Ghoda-gaadi' or you can jump up a horse for a short trot along the beach.
It's a relatively clean beach, though not that scenic. Coconut trees line the beach and there are villas and inns surrounding them. At the beach, you will get everything from the basic cricket accessories like a bat and a ball to shorts for those who forgot they were coming to the beach to boiled 'chana' to pink , yellow and orange 'mhaatariche kes' to 'chai' to 'taadi' to coconut water, to sweet 'taal gud'. Why, I even saw a woman selling vegetables???Didn't see any water birds, I guess that was obvious due to the huge crowd.
Also didn't see anyone attempting to swim, dunno if it's safe though a lot of people were frolicking in the water!! But one thing you can do is bring out the creative architect in you and build up the castle of your dreams, the sand is just perfect for it.
When on the beach, WATCH OUT!! Since you can take your cars and bikes on the beach, most people DO and you need to take care to not be run over by any as you are having your funtime.
A row of boats were there in the distance, shaking in a straight line, as if tied to each other.
It's a good weekend getaway if you are a beach lover and near to the city too!!

Nearby places to visit:

The Buddhist Pagoda (Vippashana Centre) is a few kms away from the beach. My friends who visited it said it's nice and beautiful there and the view at night when it's decorated with lights is quite astounding. Didn't know about it before so missed it, but next time for sure....

Didn't do a lot of photography but here are some of the photos I clicked...

Have you seen the flamingos??

Sewri is one of the stations on the Mumbai Harbour train line.
Sewri is characterised by its' dock, a harbour lined by huge container ships, cranes where loading and unloading, black smokes of huge industrial units are the norm of the day.
Sewri, not a very handsome locality is one of the unique places where you see train tracks on the road and can experience a green flag being waved in the middle of the road for the huffing engine to pass by, while the four wheeled comrades wait their turn.
BUT, BUT and BUT, a small drive from the Sewri station, near the docs, the jetty opens to the sea AND then there are mud flats lining the shores AND the pink visitors choose these mud flats  of all places....

Every winter, a flock of these FLAMINGOS are spotted in the Sewri mud flats. We were the not the lucky ones as we didn't spot any. It was high tide and that was probably the reason. We did spot many other water birds though and had a great time watching the sunrise in the backdrop of ships in dilapidated conditions and huge container ships. Some shied away, while others posed for the shutterbugs.

Will try my luck again to see the shades of pink!! 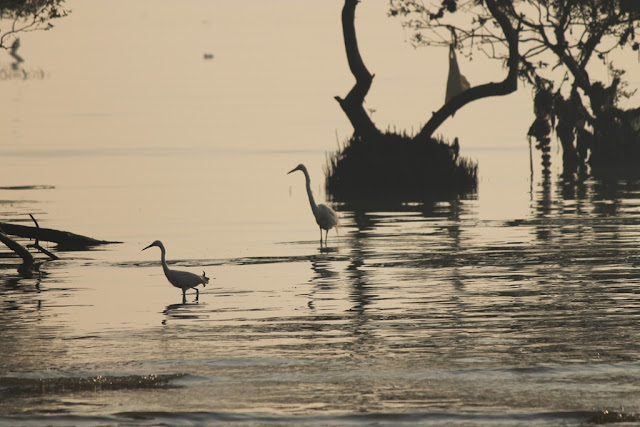 Posted by comfortably numb at 7:32 AM No comments:

Perched high above,
An eye, alert, on all that flows, much below
We, of a feather flock together,

yellow, green, blue, red, dark, light,
fancifully real, feathers of delight
Soaring into the clear blue skies, our flight,
the colour of freedom, only shadowed by the night...

to each other, a wonder, you to me, me to you
His creation, a juxtaposition of different hues
Get used to me as I try and get used to you.....
- SDC

Had been to Karnala when I was a kid. All I remember of it was the huge yellow beaked h﻿ornbill in one of the cages. That guy was missing on this visit though!!
Karnala, is about 10-12 km from Panvel and the bird sanctuary is actually bifurcated by the national highway. Though in such proximity to Panvel, we had some difficulty reaching there. The thugs (rickshaw wallahs) wanted INR 200 and we refused to give in. The ST stand was full of buses, but it seemed no one had a clue to where the birds actually nest and rest. A sensible guy told us that buses going to 'Alibaug' and 'Pen' go through that route but finding one was getting on our nerves as we were directed from one 'phatak' (stop) to another with every Ham, Prick and Weary conductor having only one word in the name of guidance "Pallikade" (On the other side in Marathi).
We gave up and gave in to the rickshaw wallah at the rickshaw stand near the ST stand for INR180 to the bird sanctuary. Another thing to remember is, don't ask the locals for the 'Karnala Bird Sanctuary'; they will go blank as if you asked them about their illicit affair... instead ask for 'Karnala Abhayaranya' and the enlightenment is dawned upon them.
The bird sanctuary is actually a small one and most people come here for a trek to the Karnala fort or for a day picnic. As the day progresses, you will find families flocking on a weekend, well packed with home made lunches and unpacked kids with their cricket bats, yelling at the top of their voices. Actual bird lovers are few at the sanctuary as you can hear loud voices of groups of braying human donkeys all around and then they complain of not sighting any birds...asses!! A suggestion for bird enthusiasts would be to visit on a weekday if possible. We did see some passionate patient people with binoculars waiting to get a glimpse of the feathery family on the 'Hariyali trail', one of the trails for bird watching in the sanctuary. A middle aged couple actually showed us an 'Asian Paradise Fly Catcher'. What a beautiful and strange bird with a white spotless tail about 4-5 times the length of its body. The other birds we saw at the sanctuary were an owl, egrets, a blue thrush, herons. The fauna included the black faced langur, monkeys, squirrels and a giant yellow spider. Among the caged ones were peacocks, parrots, some coloured doves, and rabbits.
Whether you are a bird enthusiast or not, a lovely winter walk through the jungle has a flavour of its own. Amaze yourselves at the twisted trees and vines as you see the 'Thumb' of the Karnala fort in the distance. As you finish the 'Hariyali trail', you come out to the bird cages and there is a small guesthouse and a canteen. Beside and behind the canteen begins the path for the Karnala fort trek. We did venture on the trek, but that on the next blog....FEEL FREE....FLY FREE....LIVE AND LET LIVE!!

Thanks Nishant and Anil for being a part of this trip!!

Some gyaan on the sanctuary:

Posted by comfortably numb at 11:40 AM 5 comments: