Silvassa - Enjoying a beautiful temple, a lake and a safari - 25th Dec 2013
It takes a lot of self coaxing to cross over any mental barrier. Though I dream a lot of travelling great distances in my car, the farthest that I have driven is to Kashid & Palghar (Kelwa). Also, there is the peer belittling you when friends and colleagues have covered more than 50,000 kms. while your reading shows a lousy number of 5,000 kms in 2 years. To overcome this was one of the reasons to take the trip to Silvassa and it took a wee bit more will power and confidence than the usual measures.

Two primary reasons to visit Silvassa was the recommended drive by a friend of mine and a visit to the deer park, which had good reviews on TripAdvisor. Any excuse to roam the forests was always a good one and to be able to see animals in their natural habitats was an added bonus. Silvassa otherwise is a industrial town but there is much to see in its outskirts. Silvassa is around 150 kms from Thane.

'Time and tide wait for none', they say. Departing an hour late than the planned time made us miss the visit to the Deer Park. Though we missed watching the shy spotted deer, our eyes did feast on the not so majestic frail and aging lioness at the Vasona Lion Sanctuary. Up, close and personal! While we were in the bus watching the lioness, there were over smart people among us who thought they owned the animal since they had doled out Rs.25. There were stupid remarks like 'Abe nakhre kyu kar rahi hai, idhar aa', 'Lagta hai jyada kha liya hai isne', 'Sirf pair dikhaoge ya poora animal dikhaoge'. Felt like throwing them off the bus and determine if they had the courage to say the same things then. Grow up guys!!

The various other tourist attractions in Silvassa are listed below. The entire Gujarat Highway is a drivers delight and feels like a true romance between the tyres and the tar. While returning, we were however stranded for more than 2 hours at the Versova bridge which had devloped cracks.

I would rate Silvassa as a very good weekend getaway from Mumbai since there is much to do and see!

Satmalia Deer Park (To be visited)
This park is loctated on the Khanvel-Silvassa Road. It is a great opportunity to see the shy animals in their natural habitat. The park boasts of having different kinds of deer. Though, it was earlier allowed to take vehicles inside the park, now it has been restricted. There are now 2 jeeps that are used by the Forest department to take you through a tour of the forest. And guess what? It's free!
Closed on Mondays. Timings: 7 am - 11 am and 3 pm - 6 pm

Vasona Lion Safari Park (Visited)
The park is located on the Khanvel-Silvassa Road and a few kms away from the deer park. Currently, there is only one lioness and one is driven in a bus to watch the lioness. The tour lasts for hardly 15-20 mins but is worth to see the majestic animal from such close distance in the open.
Fees: INR 25 per person
Closed on Mondays. Timing: 9 am - 5 pm

Dudhani (Visited)
The drive to Dudhni is very scenic lined with sloping trees all along the road. It is 17 kms away from Khanvel. Dudhni is a large lake formed due to the waters of the Madhuban reservoir on the DamanGanga river. As you cross Khanvel, you get to see the placid waters at a distance. There is also a panoramic view point on the way which allows you to take pictures of the water body and its serene surroundings. At the Dudhani End Point, there are shikaras (boats) available for an 30 minutes ride in the lake at a cost of INR 200 for 4 persons. Adjacent to the Dudhani End Point, is Neertal Tourist Complex, which has a clean and green garden where I saw a lot of people picnicking and also has accommodation facilities. There are a few eating joints also available near the lake.

Swami Narayan Temple (Visited)
The Swami Narayan Temple is a must visit whether you are a believer or not!It is not a very old temple and work is still being carried out in the temple surroundings. This temple is beautifully located adjacent to the DamanGanga river and is on the way to Silvassa on the Silvassa-Bhilad Road. The carvings are intricate and immaculate. There are various domes to the temple. The temple walls are covered with thousands of such beautiful carvings and idols of various saints from around India. The temple opened at around 11:30 am and the aarti soon followed with a prayer being chanted by the priests followed by the sound of Nagada and bells. As the main doors enclosing the deity were opened, it was surprising to see the clothes of the deity. The idol was dressed like a prince with a grand turban and a sherwani like blue coat. It truly looked royal and never before have I seen any idol being dressed in such a manner. It was really beautiful. Outside the temple are well maintained gardens with statues of deer.

VanGanga Lake Garden
This is a picturesque garden 26 kms away from Khanvel. It has boating facilities in the adjoining lake. Closed on Tuesdays

Tribal Cultural Museum (To be visited)
In the heart of Silvassa, it is located at Char Rasta, near the Tourist Information Centre. Housing life size statues of tribal people, their hunting tools among others, it gives you a glimpse of the tribal culture. Closed on Tuesdays. 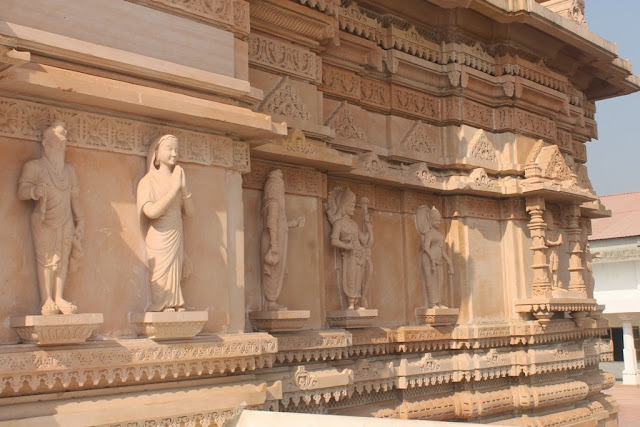 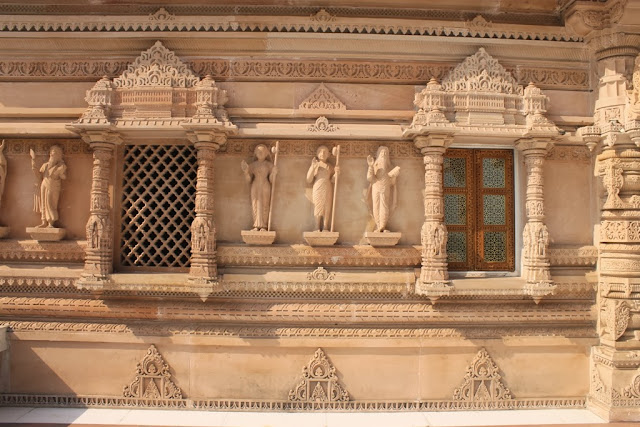 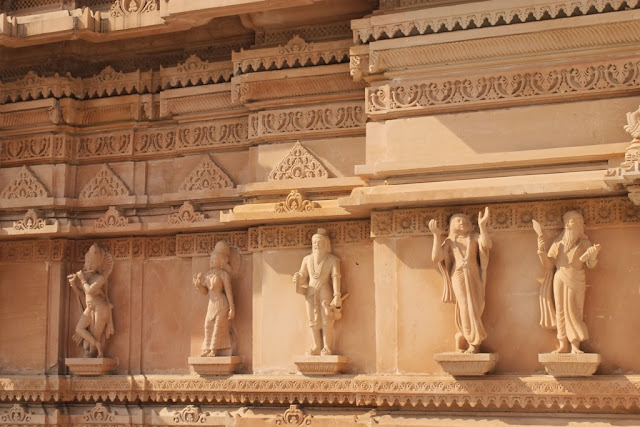 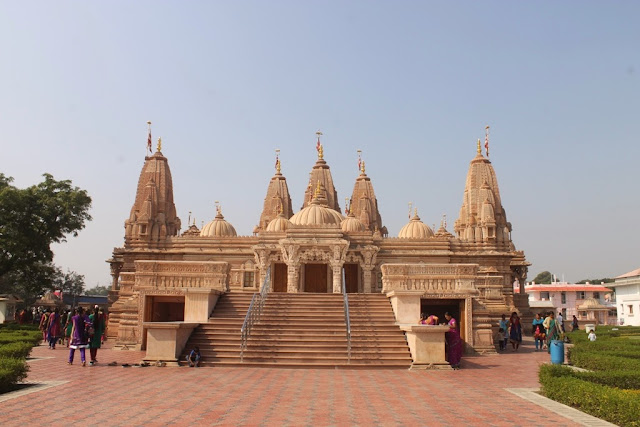 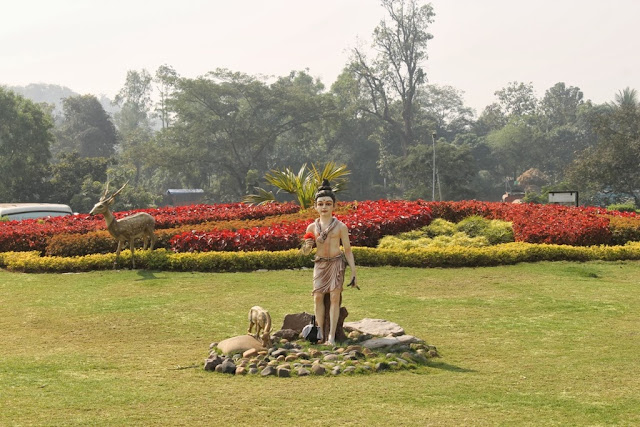 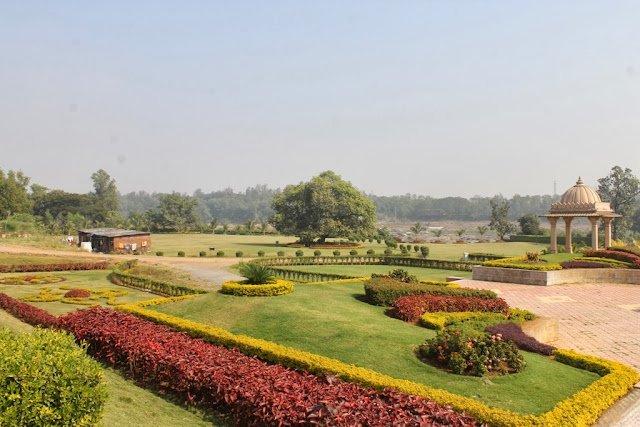 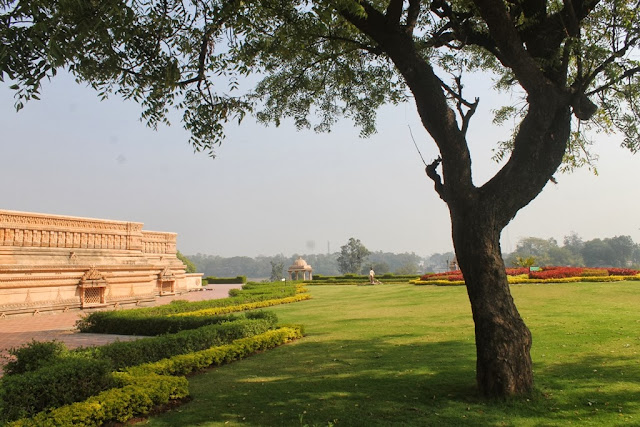 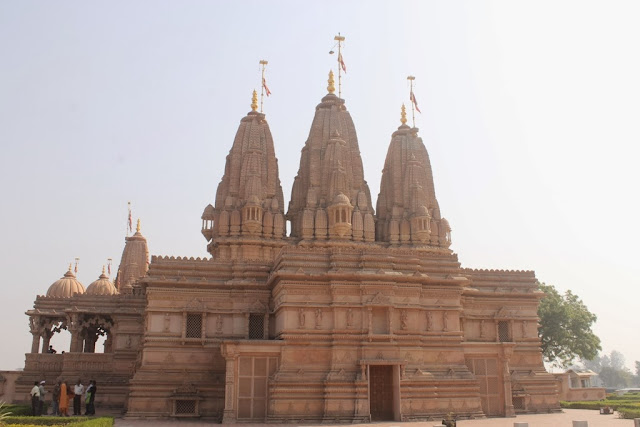 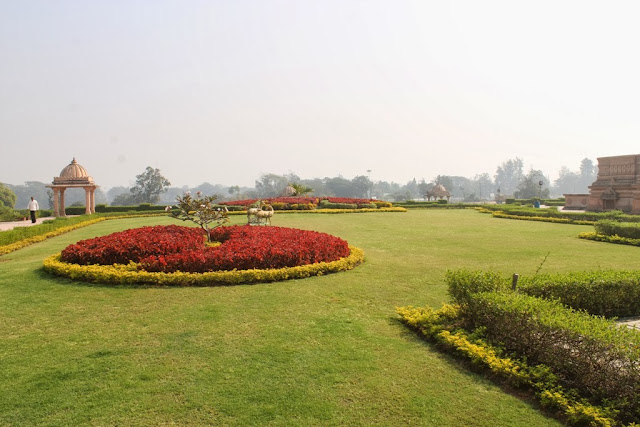 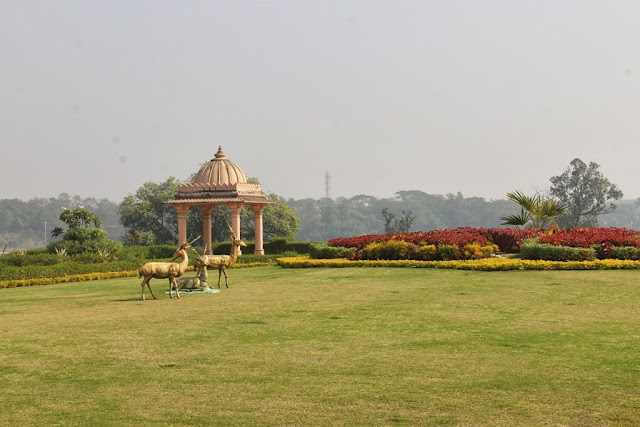 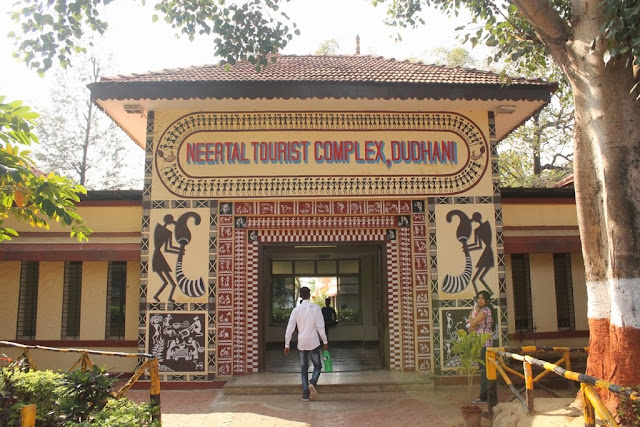 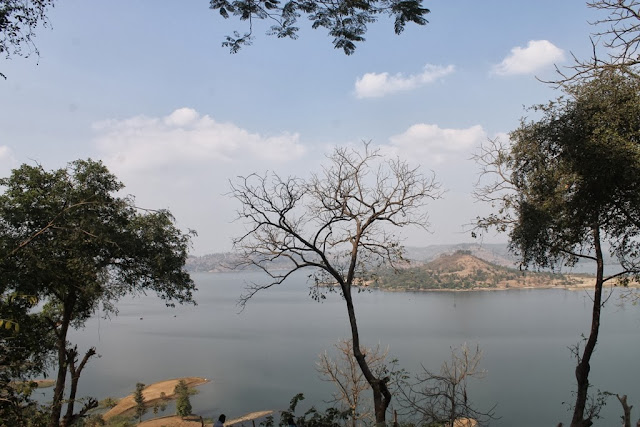 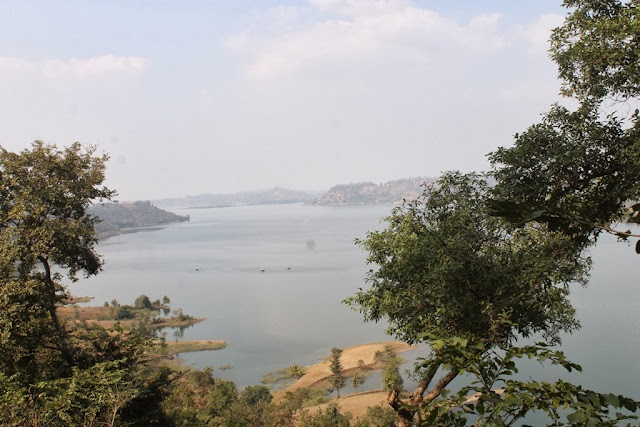 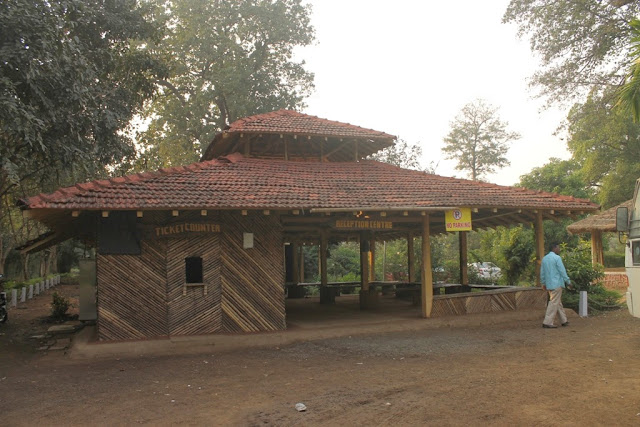 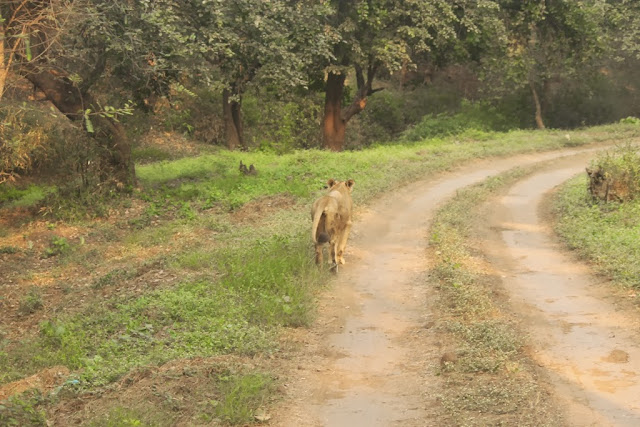 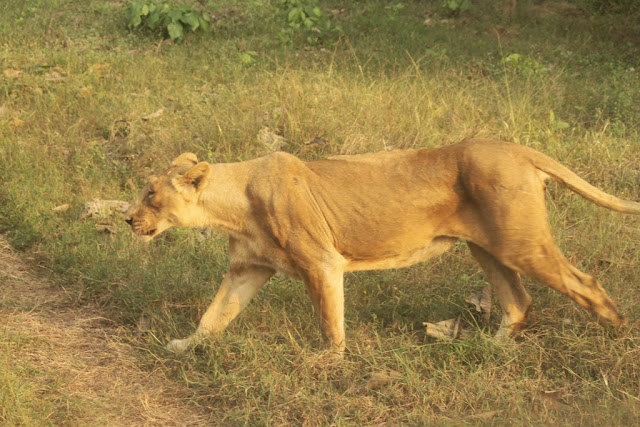 Mussourie - a romantic getaway (20th & 21st Nov 2013)
As a part of my Uttarakhand itinerary, I was in Mussourie too. The journey from Duggalbita in Chopta to Mussourie was strenuous and I spent the whole day traveling, from 7 am to 9:30 pm. From wading like a directionless drifting boat in the curvy forest roads from my campsite in Dugalbitta to Ukhimath, traversing the dangerous roads from Ukhimath to Rudraprayag and then following the Ganga all the way to Rishikesh and then traveling the people infested city of Dehradun, the journey did tire me and tempt me to return back home. The last stretch from Dehradun to Mussourie was to be in a classic Ambassador. Our driver seemed to be greatly influenced species of the tortoise and he maneuvered his car at such a careful pace that a cyclist would have reached faster.

As we were approaching our destination in the darkness of the night, the lights of Mussourie twinkled in the distance and it appeared as if someone had bought a series of the Diwali lights and had insouciantly neglected to arrange it. The map created by the shimmering lights looked like a moving amoeba changing shape and size with every curve that we left behind bringing us closer to the summit. Finally we reached and I checked in to my hotel, had a quick and awaited dinner and pushed of to sleep.

I was put up at the which is near the Library House and offers a scenic view of the Gangotri glacier and the neighboring mountains and valleys from each window. I was pretty happy with the allocated room.

Mussourie is a dainty town and still has some of the colonial feel to it. Like most hill stations, it has a which is its prime attraction and shopping centre. And like most other hill stations like Shimla and Manali and Mahabaleshwar and Ooty, it is more for the newly wed honeymooners than solo travelers like me. Coming from a place like Chopta and having been so close to the snow clad mountains, the place didn’t interest me much and the only thing I did for 2 days is walk on the Camel Back road and shop a lot on the . The weather was pleasantly cool and nights were colder. Evenings and mornings saw a mist engulfing the houses lining the hill and gave every reason to render a romantic look. Sharing and relishing a corn or munching on peanuts while the cycle rickshaw rider sweats out paddling, enjoying the vantage points to take in the scenery and posing for that early happy memory of married life, the possibility of long romantic walks holding hands with your loved one while sharing silly nothings, licking the icy ice-cream in an even icier weather, widening your mouth to gulp down that golgappa or go on a shopping spree for woolens, accessories and others or disappearing in the mist; Mussourie is a delight for the romantically inclined.

Places of Interest in Mussourie 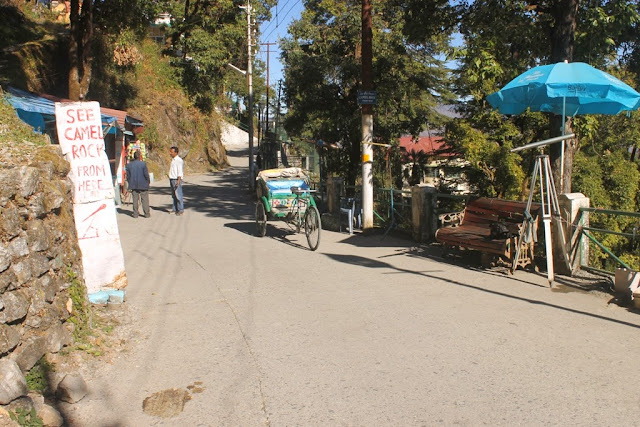 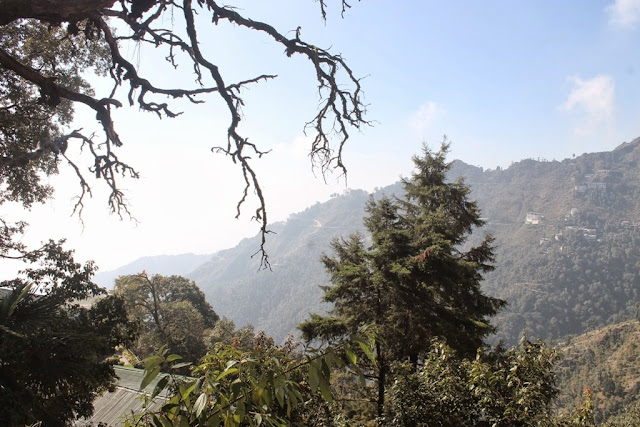 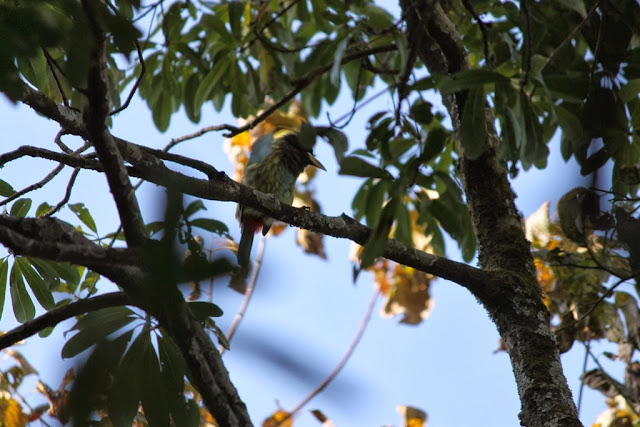 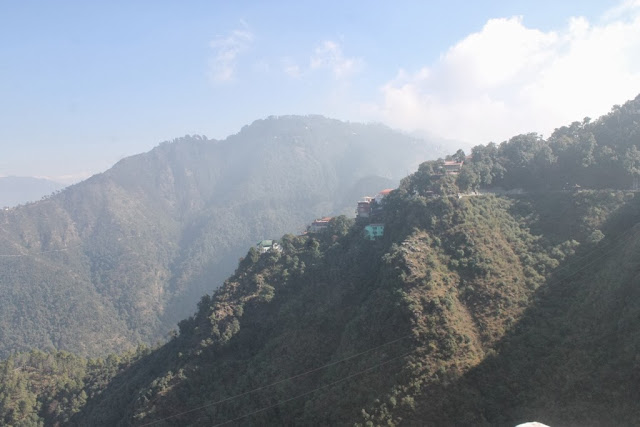 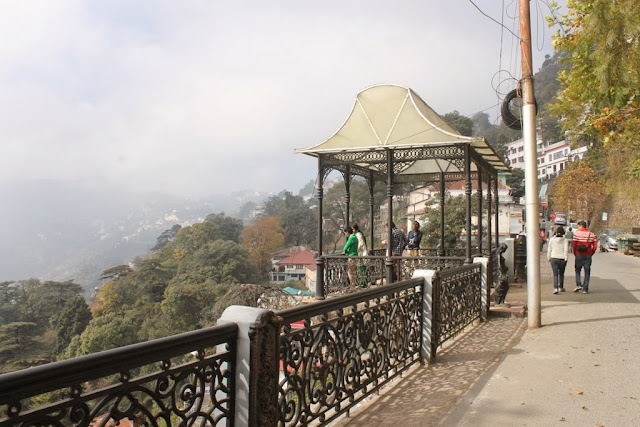 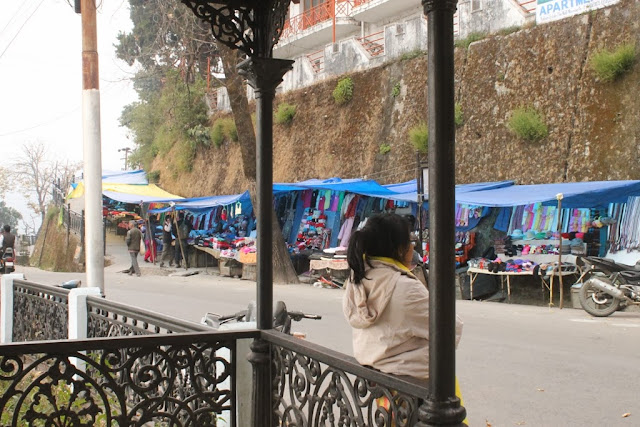 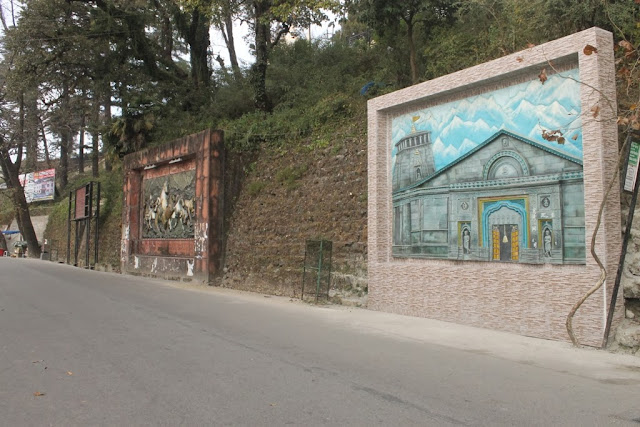 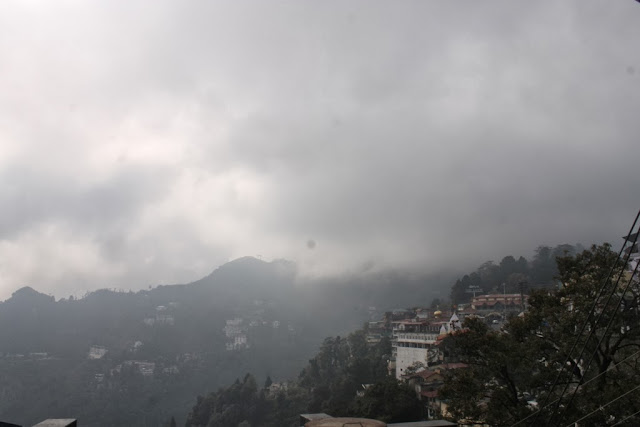 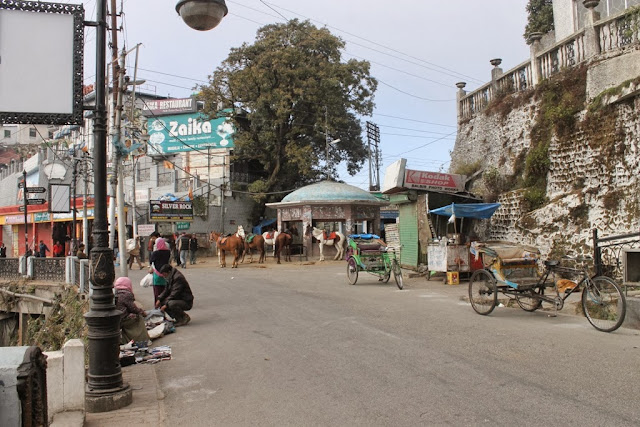 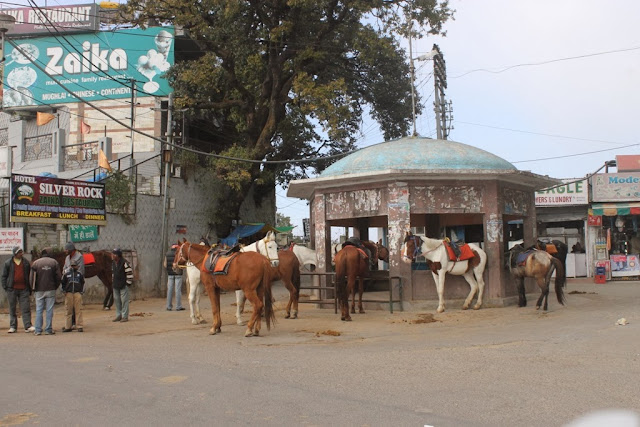 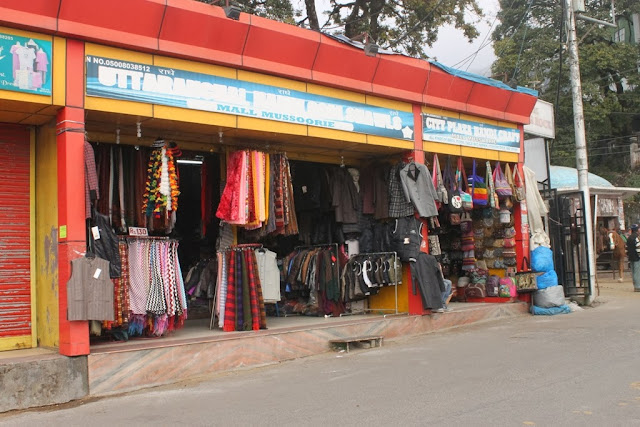 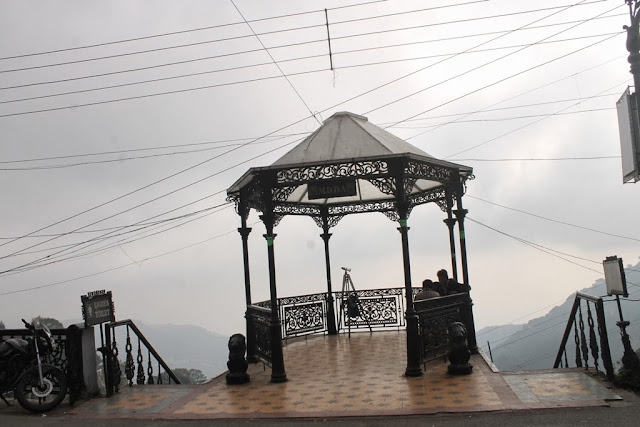 Posted by comfortably numb at 11:37 AM 3 comments: