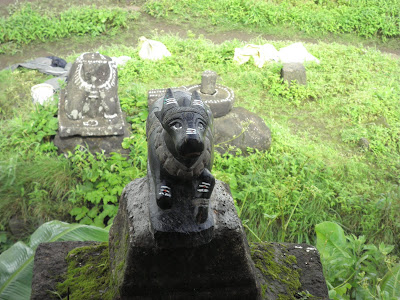 
– these words from Bhalla were enough for Teja’s face to go red with anger in Andaz Apna Apna. But!! We planned, planned and planned more for 3 weeks to go to Ekveera and Tikona Fort. This was supposed to be our 2nd trek after the mighty Harishchandragad near Malshej Ghat which had set my adrenaline pumping.

The initial plan was to stay overnight at Karjat at a friends place and then leave in the morning. Initially it was to be a group of 8 guys from Dombivali and 6 of us from office. We surfed the net, collected all the info, got excited by the amazing photos taken of these places, almost got inside google maps and could see ourselves gliding down the orange strip between Thane and Kamshet on google maps – what would we have done without the internet???? (A special thanks to Amit Kulkarni – we loved your pictures of Tikona and that partially inspired us to take the trek). Though, as happens usually, the usual people at the usual time in the most unusual way thought that they usually had better things to do and as usual they dropped off!! Long story short – after all the subtractions and divisions, Nagesh, Srinath (Chubby Cheeks), Kaushal (Major) and me were the last guys standing!!


Chubby stayed at my place on Saturday as he had come all packed up on Saturday. The overnight stay at Karjat had got cancelled. All four of us were to get together (Major from Matunga, Nagesh from Dombivali) at Thane and leave at 6:00 am sharp. The most eventful event happened at the very beginning of the trek. The moment I started my bike and asked Chubby to sit – TTTRRRRRRRRR – the cloth on his pants failed to expand as per the instructions of his expanding thighs and bum and gave way – ‘Shit! Majhi pant fatli’. I was worried he would want to change his pants as we were already getting late, but that didn’t happen and we met the others at Cadbury’s naaka. At the Airoli bridge, we had chai and then embarked on our journey…Chubby behind me and Nagesh behind Major.
After having missal paav and wada paav’s at Khopoli, we continued towards our destination. We had a photo session break at the Mumbai-Pune expressway at the bifurcation for Lonavala and Khandala and a little ahead we had another break as the scenery was really good. I guess on the left I could see Dukes Nose, below was our return path on the Mumbai Pune Expressway, and ahead lay the mountains of Lonavala. Some monkeys observed us from the distance and as they got closer, we decided it was time to leave. It’s a real pleasure to ride in the mountains inspite of the ups and downs. Lush greenery, clear blue sky, the fresh air are a welcome affair.
﻿
﻿ At around 8:30 – 9 a.m, we reached Ekveera, Karla Caves after taking a left on the road to Kamshet. It was over crowded and the on the way, the road was filled with drunkards who seemed to have started early or never stopped from the night before. We had difficulty finding a place to park our bikes, but finally we found a spot and allowed our bikes to doze off a bit. We took the road up instead of the stairs to Ekveera. Chubby was on steam as he couldn’t find a place to answer Natures call. Half way up, Chubby’s prayers were answered and after he returned, we continued our way to the top on the stairs. It was really crowded as the place was full of worshippers. We decided en-route that if we stand in line to get a chance to enter the temple, it will get very late; hence we were to take our blessings from outside. The Karla caves in the background of the Ekveera temple is a beautiful site to see. You HAVE to stop and think for a while about the artisans and people who carve these caves out of a mountain and turn them into such grandeur. It was very dark inside the chaitya. The dome shaped stupa and the carvings inside were beautiful. The lion pillar outside was equally a sight. It gives you an amazing feeling to go into restrospect and think about the period when Buddhist followers used to stay and pray in these caves. Near the stupa, we saw a strange sight. People were throwing coins and some kids were behind were fighting to collect them in the darkness with a small torch in their hands. Guys…please preserve the place!! Coming out of the main cave with the stupa, we visited other smaller ones the right side of the Mandir. It is said that (Nagesh Baba said that) in one such cave, if you make a wish and a drop of water falls from the roof, then your wish will definitely be fulfilled by Chitala Devi. We did go to that cave and there was this old woman sitting at the corner of the cave and their was saffron smeared on one end of the cave walls. She asked us to make wishes and prayed for us. Nagesh was the one to make the wish and just when he commented ‘ Lagta hai Devi naraaz hai’ – he was rewarded by a drop of water. So we know for sure, his wish is gonna get fulfilled. We were the unlucky ones, rather paapi ones – no droplets for us. After paying homage and roaming a bit on the top, enjoying the waterfall near the main cave and clicking pics, we started on our descent. Once down, I clicked some pictures of a woman selling hens in a tokri. People buy them as sacrifices to the Devi. While having chai, we decided to skip lunch and get to Tikona Peth, the forts base first as we were already running late and didn’t want to end up riding in the dark. On the way back, the ‘Gataari’ element was in full bloom as we passed ‘fully tuun bewdas’ in the middle of the road. They were completely high and weren’t moving even if brought trucks to their faces. We were looking out for Mr.Wahlekar as he was also in Lonavala with his friends, celebrating Gataari. 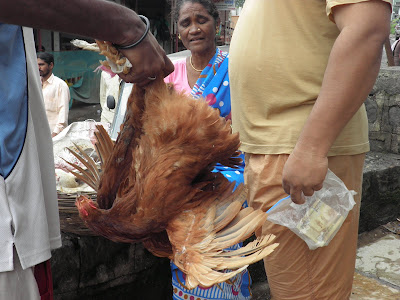 From Kamshet, we took a right towards Pawna dam. Riding through villages and muddy roads in between, we got up the ghat to the final ride towards the forts base. We stopped at a spot near a tower….we HAD to…the scenery was completely breathtaking…great…simply great…a sight to treasure…something that no camera can capture…a thing that completely belonged to that moment!!! Beyond the Pawna dam was the Tung fort like a hat kept on the water. Nagesh describes it as a submarine. Tikona fort was also clearly visible. We clicked a lot of photographs with Tung and Tikona in the backgrounds. The climate was also very good with lots of breeze and it wasn’t feeling hot even though it didn’t rain. Clicked lots of photos of my bike. It was the perfect location for the Avenger ad. – Feel like GOD!! 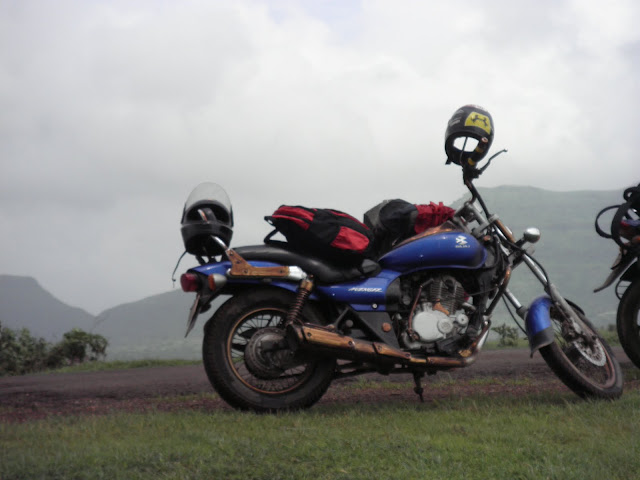 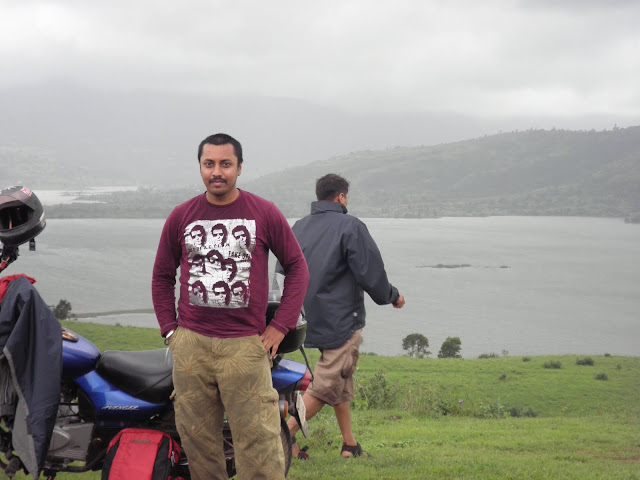 After satiating ourselves of the surroundings, we jumped on our bikes for the final destination – Tikona killa. We kept our bikes near the Mandir at the base and started our trek at around 3:00 pm. The initial walk was through muddy sludge and in no time our floaters and legs were submerged in ankle wide mud. We could hear voices coming down the hill and knew we were in the right path, but we did miss a shorter route. Sloshing merrily, after a while the ascent started. The climb was enjoyable and the scenery was simply beautiful. We came across a group of kids with their Sir coming down. It felt good to see children coming for such treks on a Sunday instead of watching movies and playing video games. It seemed we were the last group going up as every one else was getting down. That gave us an idea that we should hurry up, else it would get dark soon and would be difficult getting down. We were accompanied on our way up by 3 sardarjis. On the way up the first cave, we stopped at a small shelter where a ‘mawshi’ was selling tea and pakodas. We settled for tea. There was another cave nearby which was painted red and occupied by a Sadhu Baba and had a pond in front – really nice. The last climb is a bit dangerous and steep, especially in the rain as it gets slippery. Again we came across one or two families and all of us got a chance to give them a helping hand. Reaching the top felt so fulfilling. It was simply beautiful and we got a real blessing from the skies above when we saw a complete RAINBOW. I don’t even remember when was the last time I saw one. It was a panoramic view. We could see the path we came from…the entire region below. We now understood why this was such a strategic location. One thing I noticed and found amusing was that all the temple tops we could see from there looked almost identical. At the summit, there is a small yet beautiful Trimbakeshwar Mandir with a small Nandi bull outside. Below the temple were small pathways heading below - ‘Chor vaats’, which might have been for storage. 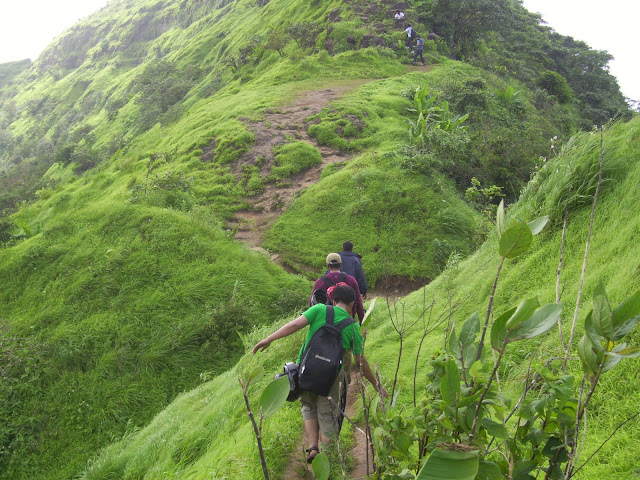 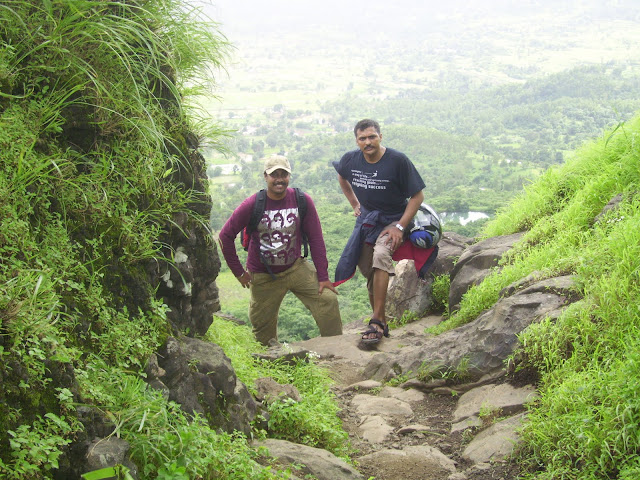 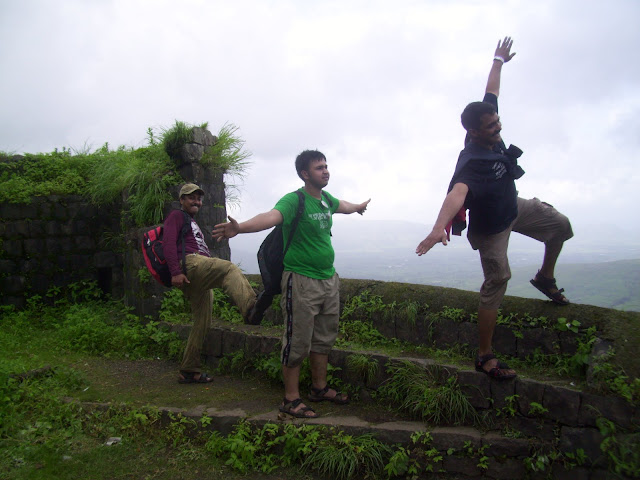 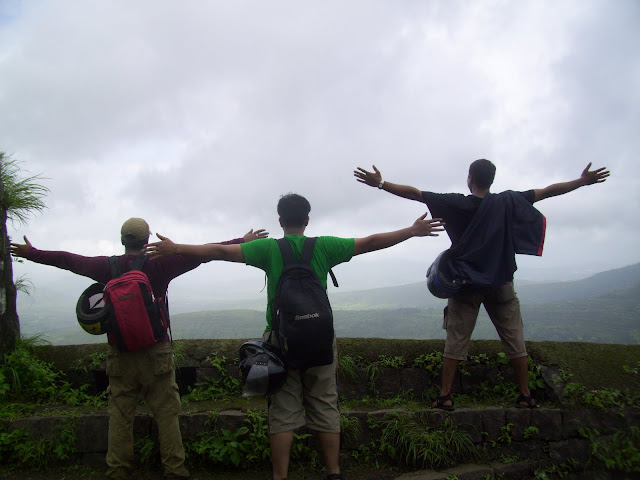 There is a pond at the top, a little behind the temple and behind the pond, the scenery is again breathtaking. One can see Lohagad from there. The fort was left all to us and the Sardarjis as there was no one else. After our photo session, we started downwards, and after having chai and kanda bhajis at Mawshi’s, we (Major and Nagesh) found the short cut that we had missed and after Majors’ certification that it was relatively safe, we took that route. It was a bit slippery but okay. Chubby fell once on the way down and it was a Kodak moment. His instantaneous reaction was putting his hands up and saying ‘Jai Maharashtra’. We spent a little time at Pawna dam watching the sunset - another sight not to miss.


Heading home, we did what we dreaded i.e. ride at night, and believe me it’s not a very enjoyable experience and is not safe at all. Could hardly see the road ahead of us and with lights blinding your eyes, no street lights, it’s very very difficult to ride, especially in the rains – please avoid. Anyway, after buying chikis and fudges at Lonavala and later having dinner at Malwani's, we were on our way. On the way, at the near the Sion flyover, which we took by mistake, saw a very sorry sight - a decent looking guy, highly intoxicated was walking naked in the middle of the highway. Don’t know what’s happened of him – prayed for him – guys avoid things you can’t handle. We eventually reached Thane at around 12:10 pm. Another expedition came to an end!!


Thanks to Nagesh, Kaushal and Srinath for making it happen as it almost got cancelled. Cheers!! Start planning for the next one….
Kahaani khatam hai, ya shuruat hone ko hai
Subah nayee hai ye, ya raat hone ko hai!!
Posted by comfortably numb at 2:32 AM