Got up to a fresh sunny morning in Fort Kochi. Skipped having breakfast at the homestay as I wanted to try out the local joints. Had medu wada, daal wada and appam with chana masala at one of the small local shops. Pretty good, I would say - that's the way to sink in !! There also was bonda, putta, egg masala (some were having it in the early morning with rice). Tea or Coffee almost everywhere in Kerala is served in a big glass (nearly 2-3 cups for us Mumbaikars).


Dad wasn't feeling well as the full blown A/C in Duronto didn't suit him. So I decided against walking, and asked Mr.Aboo for alternate options and he arranged a Rickshaw for sightseeing. He also instructed the rick fellow to take my Dad to the doctor. We started with visiting the Santa Cruz Basilica. The church was full with the nearby convent kids as the Father was delivering a sermon. Waited for some time as the choir of little girls chanted sweetly. It felt good. The Lord, high there, behind the Father was blessing us, surrounded by stars. Saw the confession box as well, but decided against entering it as my stay would have extended considerably :) Saw beautiful pastel coloured angels flying on the interior walls of the Church. This is one of the oldest and beautiful churches in Kerala.

We then went to the 'Koonan Kurishu Shrine' towards the Mattenchary bus terminal. Boy, is this temple huge? It is !! You will like the temple as soon as you enter it and I would put it as a must visit place in Fort Kochi. The entrance is beautiful, and as you enter you see a tall multi-layered 'deep'. As you cross it, you see a huge bell and a person sitting and ringing it with a big chain tied to it. As I tried to go inside, the person ringing the bell said something I didn't understand. Later realised that you can go the inner boundary of the temple only after removing your upper body coverings/vests (only for men). As I did my 'Pradakshina' around the temple, saw a cattle pen behind. There were 2 guys playing the shehnai and mrudungam. Outside the main gate of the temple, on the opposite side, there is a small pond with a temple floating in the centre. You can bathe amidst the beautiful lotuses and wash away your sins. We just wet our feet in the calm and cold water.

We then visited a nearby ginger factory. You can buy spices from the outlet they have upstairs.


Next we went to the Jain temple. Not many people in the temple that day. The 'Dutch Palace' was the next on list. From the outside, it doesn't seem outstanding at all and you will feel it to be not maintained and neglected for the historical importance it holds. The Palace converted into a museum hosts a gallery of the Rajas of Cochin and beautiful murals of Hindu Gods and Goddesses. The museum also exhibits old coins of a bygone era, weapons used by the Rajas and their armies. Some of these weapons were really interesting and we got a glimpse of them later in Thekkady at the 'Kalaripayattu' show.


After having coffee at one of the typical coffee houses (the nearest you can get to the Irani restaurants, i guess) in Mattancherry, we went to the St.Francis Church, which is near the beach. The Church was pretty quite till a bus offloaded a horde of picnickers. Time to leave, I thought, but not before visiting the Vasco-da-Gama tomb inside the church and a beautiful inscription on one of the last benches of the church, which said "I WILL GIVE YOU PEACE AND QUIETNESS" - much needed !!

We, yet again landed up at the Chinese Fishing Nets and saw Vipin island in the distance. You can catch a boat to Vipin island from the jetty at the end of the beach, after the fish selling shops. For a fish lover, the shops lining the water front are a visual treat as the eyes savour fishes in various shapes and colours, shrimps, karimeen (local delight), pompfret, bangda, surmai, tiger prawns, shell fish, octopuses etc. etc. etc. A boat had just brought a fresh catch of fish :) 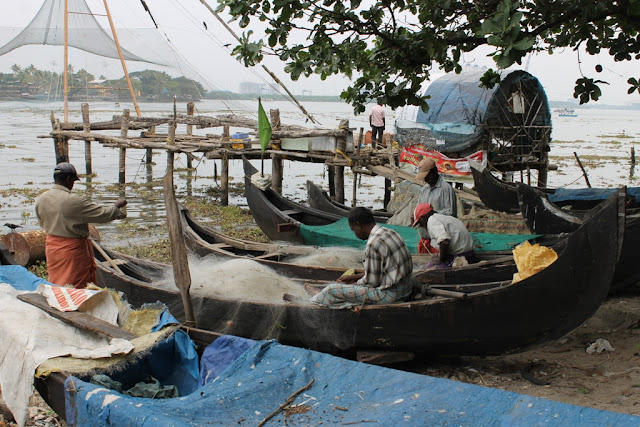 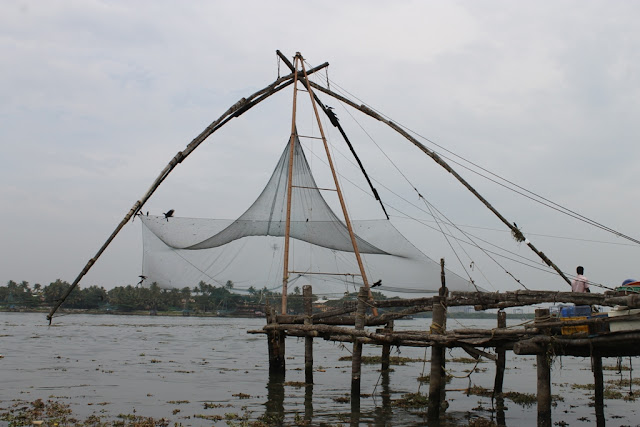 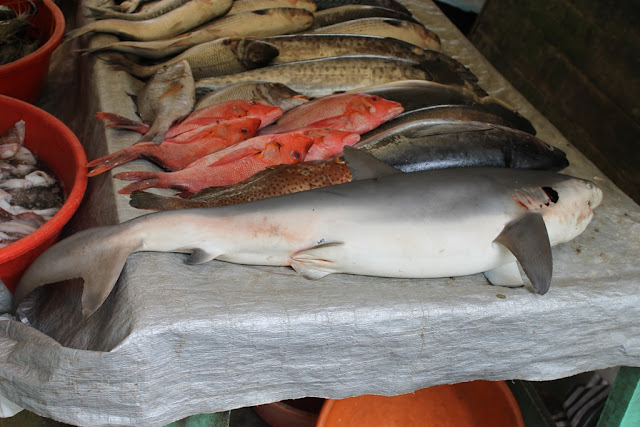 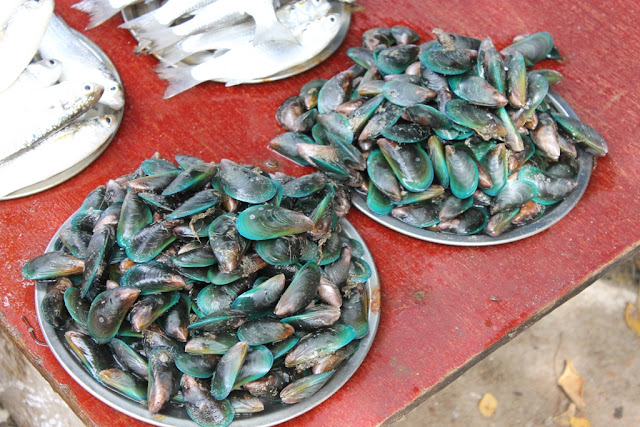 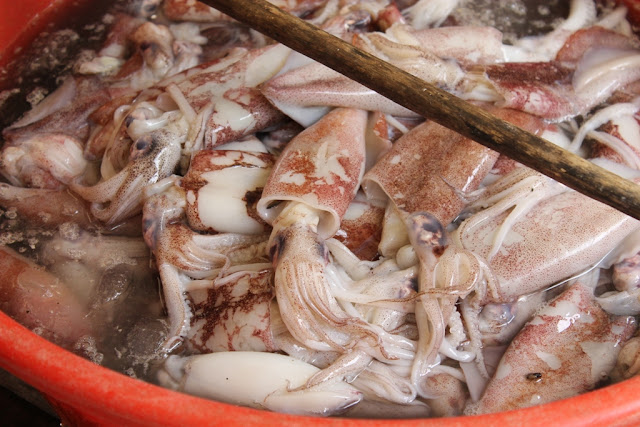 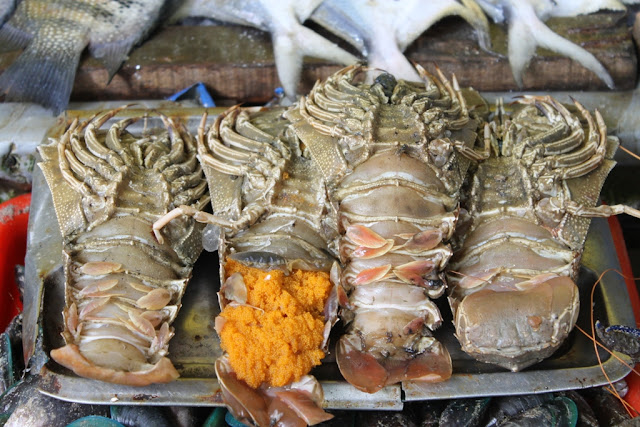 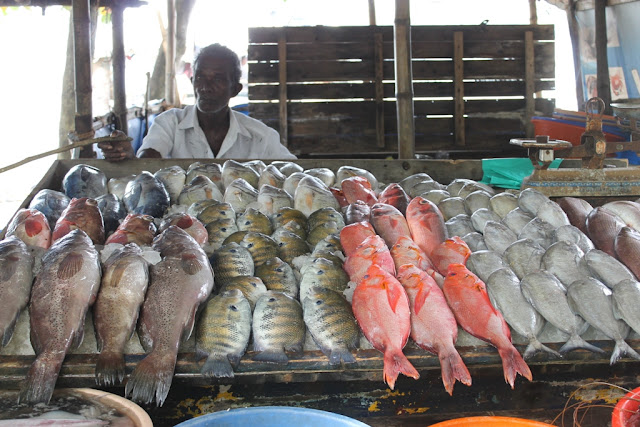 Missed visiting the Jewish Synagogue as the rick fellow said it would open only after 3 pm so we returned to our homestay after having lunch at another local restaurant.

In the evening, walked to the Indo Portuguese Museum. It was closed, but the care taker was good enough to let us enter the premises which had a beautiful garden and an even beautiful statue of Lord Jesus in silver.

We watched the sunset near the Chinese fishing nets and had dinner at one of the open air restaurants lining the water front. Walking down Princess Street, we did a bit of a shopping. Most of the wooden handicrafts here are made of rosewood. Saw an elephant, about a feet tall costing 3 lakhs INR, and I thought it would cost around 20,000 INR - ignorance, at its best. 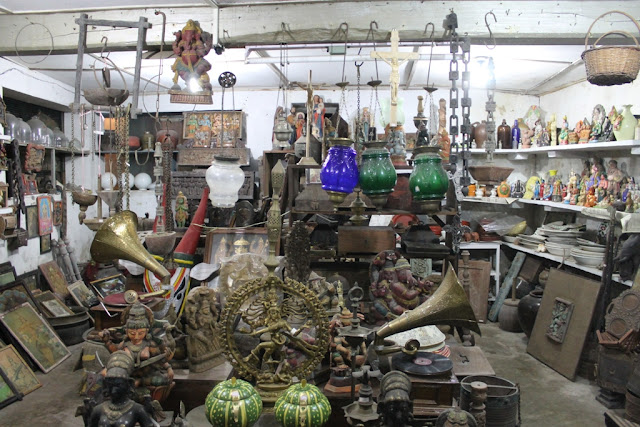 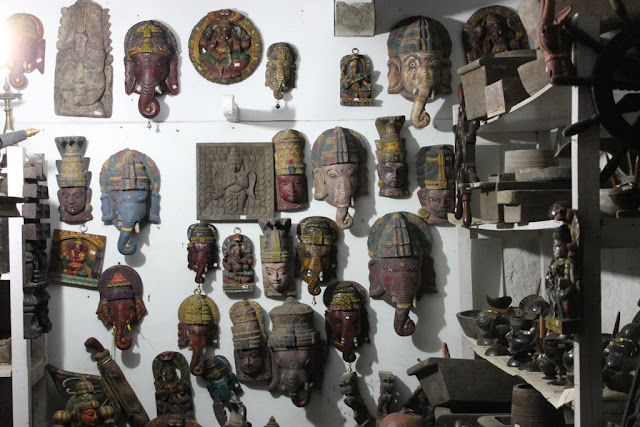 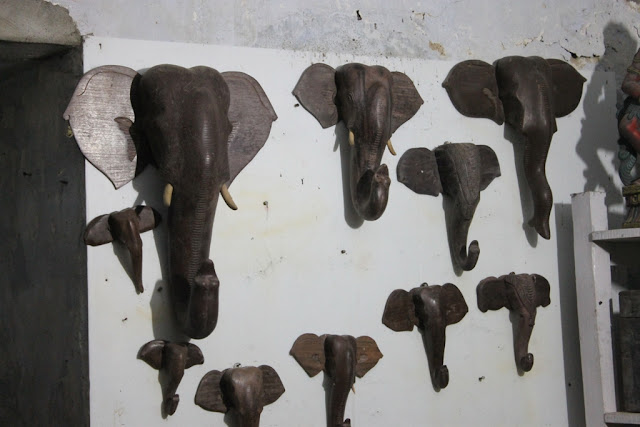 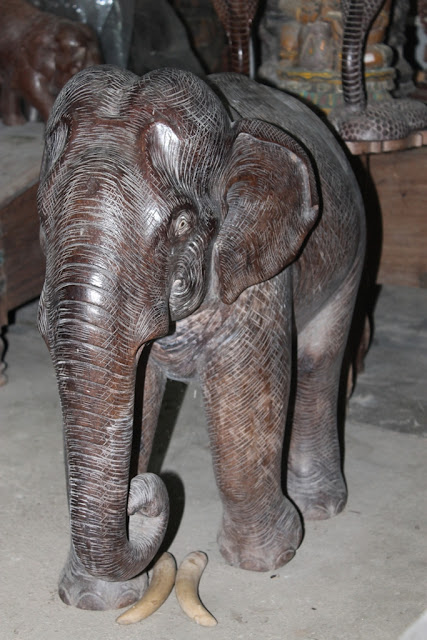 Annotations:
The sight-seeing rick was negotiated to Rs.80 per hour from Rs.100.
I would put the the Santa Cruz Basilica, Koonan Kurishu Shrine, Chinese Fishing Nets on the must do list at Fort Kochi
If you are a non-vegetarian, don't miss out on the fish.
Didn't take the boat to Vipin island as I already had a lot of boating planned in my itinerary later, but wanted to visit the light house, which the rick fellow said is far from the Vipin jetty and Cherai beach even farther. If anyone visits the light house, do let me know your experience.
If you are an early riser, catch the fishermen cast their nets and use the extra large Chinese Fishing nets.
Posted by comfortably numb at 5:01 AM